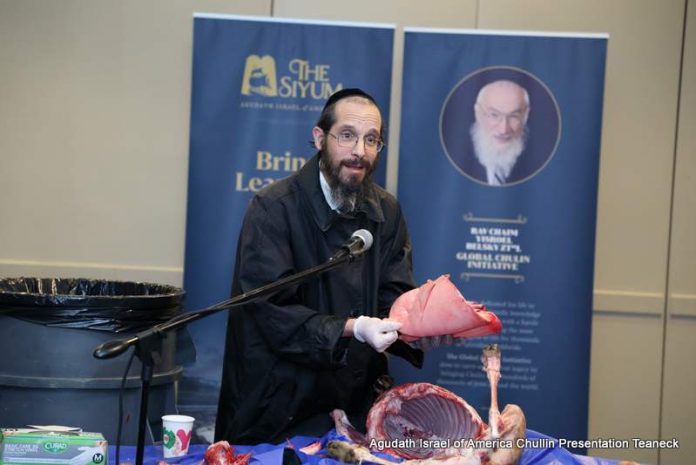 In today’s modern world we are much more distant from our food sources than ever before. Most of us know nothing about the meat we consume, other than that it comes nicely cut and packed in our local supermarket. This separation has led to a lack of familiarity with many basic halachos and a lack of understanding of large areas of Torah.
Even the commonly practiced laws of kashering chickens our bubbies were so familiar with – or knowing when to bring the chicken to the rav for a shailah – have become obscure.
Over the last three weeks, tens of thousands of people people participated in Agudath Israel’s Rav Chaim Yisroel Belsky zt”l Global Chullin Initiative presentation by Rav Amitai Bendavid, His presentations were informative and included a hands-on demonstration of these complex areas of Torah. The event series was generously sponsored by Meal Mart.
On Motzei Shabbos Parshas Vaeira alone, twenty thousand people participated in the LiveStream — in addition to the many hundreds who were present in the Belz Bais Medrash in Boro Park — as Rabbi Bendavid made the sugyos come alive for his eager audience.
This presentation has also drawn large crowds in 30 cities across the continent, from Toronto to Miami, and from Baltimore to Los Angeles. Thousands came to learn from Rabbi Bendavid, one of the leading experts in this field. Rabbi Bendavid is author of thesefer Sichas Chullin, which is the definitive handbook to accompany learning Maseches Chullin.
Rabbi Bendavid demonstrated everything one would need to know about the animal, literally head to toe, how to check a chalif, the special knife of a shochet, and he simanimof the animal. He even detoured from the Chullin related part of the presentation to show the wonderful nifla’os haBorei in many of the body’s remarkable systems. Rabbi Bendavid taught which part of the animal are given to the kohein as part of matnas kehunah, as well as which parts were sacrificed on the mizbei’ach. He clarified the difference betweencheilev and shuman, and the difference between glatt and non-glatt meat.
At each presentation, the entire audience was glued to Rabbi Bendavid for over two hours, drinking in his every word. This was a rare opportunity that opened up the eyes of not only those learning Maseches Chullin in Daf Yomi, but all bnei Torah interested in understanding these important parts of Torah.
This subject has been close to the heart of The Agudah for a long time. Rav Belsky zt”l, as Moreh D’asrah of Camp Agudah, held demonstrations like these for hundreds of talmidim over the years. Rav Belsky dedicated his life to sharing his encyclopedic knowledge of Torah and science with a hands-on approach, bringing the most obscure sugyos to life for his talmidim worldwide. The Global Chullin Initiative aims to carry on his great legacy by illuminating Chullin to hundreds of thousands of Jews around the world.
For decades, the Daf Yomi Commission of Agudas Yisroel has been at the forefront of spreading Torah learning throughout the country. On January 28, 1968, 800 people gathered at Bais Yaakov of Boro Park for the largest Siyum HaShas to date in the United States. It was followed by the 7th Siyum HaShas, held on June 15, 1975, at the Manhattan Center in New York City, which drew an audience of over 2,000, and then 5,000 gathered at the 8th Siyum on November 14, 1982, in the Felt Forum. The 9th Siyum in Madison Square Garden on April 26, 1990, drew 20,000 participants and exceeded all expectations. Since then, most of us remember the growth firsthand, with the 10th Siyum in Madison Square Garden and Nassau Coliseum, the addition of the Javits center and Continental Arena for the 11th Siyum, and the largest event of its kind in recent Jewish history, the 12th Siyum in MetLife Stadium in 2012.
The inspiration these events brought to hundreds of thousands of attendees spread throughout the world and led to tens of thousands newly committed to learning each and every day. Over the last two decades, The Agudah has taken unprecedented steps to encourage learning The Daf and understanding The Daf better with Shiurim, LiveStreams and special events like The Chullin Initiative.
Rabbi Labish Becker, Executive Director, Agudath Israel, acknowledged the significant investment of time by the many volunteers throughout the country as well as the efforts of Rabbi Eliyahu Simcha Bamberger, Director, Agudah’s Daf Yomi Commission, in bringing the light of Torah to dozens of cities.
And now, as we approach the upcoming 13th Global Siyum HaShas, to be held be”H on January 1, 2020 at MetLife Stadium and satellite locations around the world, we look forward to even greater growth in Torah learning.