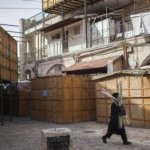 The Netherlands – Dutch police advised a municipality to forbid the public display of a sukkah out of concerns that it would be a target for vandalism, a Jewish resident said.

Fabrice Schomberg applied last month for a permit to erect a sukkah outside his home in the predominantly Muslim neighborhood of Schilderswijk in The Hague.

On Tuesday, city official Karin Wilthagen told Schomberg that the police advised the city against allowing him to build the sukkah, warning that it could be vandalized.

Despite the objection from police, the city approved his request Friday.