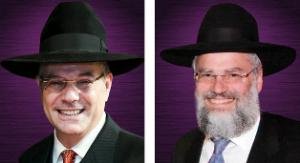 Earlier this week, Agudath Israel of America announced that Duvy Gross has been appointed as chairman of the 92nd National Convention. The convention will take place November 13-16 at the Hilton Woodcliff Lake in Northern New Jersey. Mr. Gross serves on the Board of Trustees of Agudath Israel and is a prominent member of the Torah community in Passaic/Clifton. He is involved in many local mosdos and Torah and chesed activities. He has recently assumed the role of chairman of the executive committee of Agudath Israel of New Jersey which has had many accomplishments in recent months.

The co-chairman of the convention is Rabbi Mordechai Levin. Rabbi Levin is an administrator of one of the largest girl’s schools in Brooklyn, Bais Yaakov Academy. He is the son of Rabbi Avrohom Chaim Levin, member of the Moetzes Gedolei Hatorah of Agudas Yisroel. Rabbi Levin has worked tirelessly as an askan within Agudas Yisroel and the greater Flatbush Jewish community.

We are very excited to have two askonim of such caliber chairing the convention. “Their unique qualities on a personal and professional level are outstanding. We greatly appreciate them assuming these roles and working so hard to make this year’s convention a great success,” says Dr. David Diamond, chairman of major events for Agudas Yisroel.

“What’s on Your Mind?,” the question the upcoming convention endeavors to address, has created enormous buzz across America’s Torah communities. True to its history, the 92nd convention will feature the close involvement of the Moetzes Gedolei Hatorah of America and other leading rabbanim, who will provide guidance on important issues facing Klal Yisroel as put forth by members of the tzibbur.