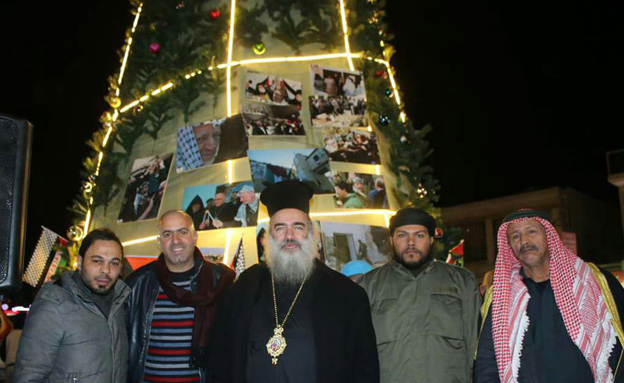 A holiday tree in east Jerusalem decorated with photos of Arab “martyrs” killed while committing terrorist attacks against Jews has been attracting prominent Arab Muslims and Christians, Israel’s Channel 2 reported on Sunday.

According to the report, one such member of the Christian community was Theodosios, the Archbishop of Sebastia from the Greek Orthodox Patriarchate of Jerusalem, who told passersby about the importance of the Palestinian people’s struggle for their land and holy sites.

The tree, declared Theodosios – known more commonly in the West as Atallah Hanna — constitutes a holiday “Christmas message” from “the heart of Palestine” — that “we are one nation defending one issue…standing firm and remaining in the holy land.”

Other people who stopped by to gaze at the tree — which resembles a similar evergreen erected last year on the campus of nearby Al-Quds University – were even more outspoken in their praise for terrorists, according to Channel 2. Some went as far as to laud those who died during the “Al-Quds Intifada,” a reference to the surge in Palestinian terrorism, which began in September 2015 and has been characterized by stabbings, car-rammings and other acts of violence against Israelis.

In a video obtained by Channel 2, Israeli Border Police are seen arriving at the tree late at night and removing pictures of the “martyrs” hanging from its branches.

Maor Tzemach, Chairman of the organization Lach Yerushalayim (“To Thee, Jerusalem”), which seeks to assert Jewish control over the capital, told the news outlet that removing the photos does not solve the greater issue of weakening Israeli sovereignty. He also railed against the archbishop – the second Palestinian in the history of the diocese to hold his position.

“This is not the first time that Atallah Hanna has taken a side in the Palestinian-Israeli conflict and has incited against the state of Israel,” Tzemach said. “He collects money for the families of terrorists in Jerusalem and glorifies the terrorists themselves at every opportunity. It is sad to see a religious leader… taking part in incitement…, rather than serving as a source of unity and moderation. I call on the authorities to take legal action against him.”

Atallah Hanna has gained notoriety in Israel for years of subversive activism. Before being ordained Archbishop in 2005, he was arrested and interrogated on a number of occasions for being under “suspicion of relations with terrorist organizations” and “illegally entering” the “enemy countries” of Syria and Lebanon.

“This indeed is a season when both communities can celebrate the triumph of light over darkness. And this timely display of solidarity shows once more that Israel is a country where religious freedoms are not only safeguarded but even encouraged,” he said.