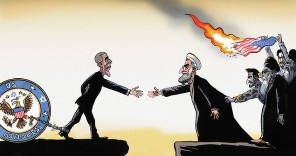 The British Economist on Monday removed a cartoon it had published two days earlier which observers blasted as anti-Semitic.

The cartoon depicted President Obama, shackled by a seal of Congress overlaid with Stars of David, trying to shake the hand of Iranian President Rouhani.

The implication was that Jews control the U.S. Congress.