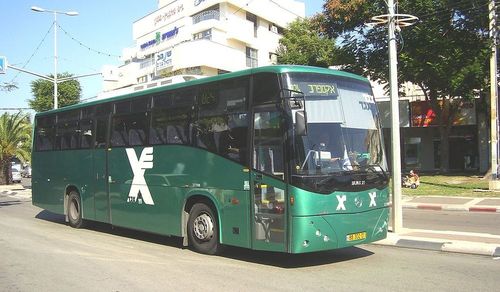 A month and a half after the fatal accident on Route 1 that killed six people and wounded 11 others when a bus crashed into a parked truck, it seems that some bus drivers have not learned the lesson of safety.

An Israeli bus driver was caught with tefillin on one hand and his cell phone in the other while driving a route for Egged.

The bus company issued a statement in which it said, “The case will be dealt with harshly.”

The incident occurred yesterday when an Egged driver headed from Kfar Chabad to Ramla on Highway 44 was caught wearing a tallis and tefillin, and holding a cell phone – all while operating a bus.

The bus, incidentally, was empty at the time, but Egged is still taking it seriously.

The driver was pulled over by a police officer for reasons unclear at this time. The officer asked the driver about his tallis, tefillin and cell phone. The driver explained that he had to daven before leaving for work and was davening from the text of tefillah on his cell phone.

The driver, a 40-year old Elad resident, received a ticket for using a cell phone while driving.

Egged said that it was still investigating this particular incident, but that it recently instituted its own fine of 2,500 NIS for any driver caught using a cell phone while driving.