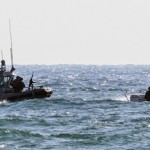 Egypt proposed a permanent ceasefire on Sunday and called for a new round of talks next month. The agenda for the next round negotiations includes deliberations on opening a seaport and airport in Gaza – Hamas’ demands which Israel strongly opposes – and returning the bodies of two IDF soldiers killed in the operation in return for the release of Palestinian prisoners.

The Egyptian proposal, parts of which were released by AFP, does not specifically mention lifting the blockade – one of Hamas’ central demands – but does include the opening of the border crossings.

A part of the blockade was already eased earlier Sunday when Israel, which had not allowed Gazan fishermen to set sail during the operation, permitted fishing operations up to 3 miles from the coast.

The demand for increasing the range of permitted fishing has been ever-present, may actually be granted by Israel – if the two parties reach an agreement. The indirect negotiations resumed Sunday afternoon, after the arrival of part of the Palestinian delegation to Cairo.

“Humanitarian assistance will continue to be transferred in places that face no security problems, and there will be further relief coordinated with the advice of the security establishment,” said senior political sources.

“Today we approved fishing up to three miles, and the signal is a clear one. It signals the need to maintain patience in the war of nerves that Hamas is conducting against the Israeli public.”

Sources in Yerushalayim also noted that “we are currently in a situation in which the delegation in Cairo with the instructions that the prime minister mentioned at the start of the weekly cabinet meeting.”

They emphasized that “it is unclear if there will be an agreement – there are two options on the table. If there is no agreement and the fighting resumes there will be a forceful response, if the rocket fire does not continue we will examine the possibilities on advancing a resolution to the situation.”

The chairman of the Palestinian delegation in Cairo, Azzam al-Ahmad, said Sunday afternoon: “We hope to reach a final agreement on a ceasefire in the coming hours, but we will not consent to a ‘thin’ agreement.”

After a meeting of the delegation with senior officials in Egyptian intelligence, al-Ahmad added: “We have clear targets. Every agreement needs to respond to the demands and aims of the Palestinian people, starting with an end to the aggression, the rehabilitation of the Strip, and a complete lifting of the blockade.”