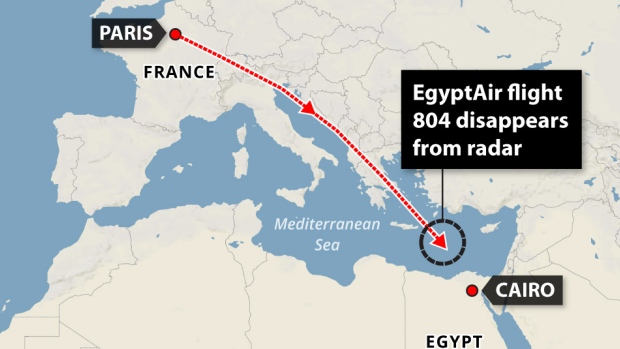 Egyptian officials said overnight that an EgyptAir plane that took off from Paris bound for Cairo late Wednesday night crashed into the Mediterrannean, the AP reported, but the officials later walked back that report  and said simple that the plane fell off the radar and disappeared.

Flight MS804 vanished from radar once inside Egyptian airspace, the airline tweeted, prompting Egyptian and Greek authorities to launch a massive search and rescue operation. Flight MS804, which had 56 passengers, including two infants, and 10 crew aboard, appears to have been an A320.

The flight was scheduled to depart Paris Charles De Gaulle Airport at 10:45 p.m. but left shortly later, at 11:09 p.m. It vanished at an altitude of 37,000 feet, at 2:45 a.m., according to the airline’s Twitter feed. Flight MS 804 was reportedly completing its fifth flight of the day when it went missing. Weather conditions were clear and calm. The pilot commander had a total of 6,275 flying hours under his belt, with 2,101 on the same model plane, according to the airline. The copilot had 2,766 hours.

Egypt’s civil aviation ministry said the pilot of MS804 had made a distress call at 2:24 a.m., though no details were available on the reason for the call. Among the passengers on board, 30 were Egyptian and 15 were French. One Kuwaiti and one Saudi national were on board, as well as two Iraqis, one Sudanese, one Portuguese, one Algerian and one Chadian. There was also one British national, one Canadian, and one Belgian. Read more.