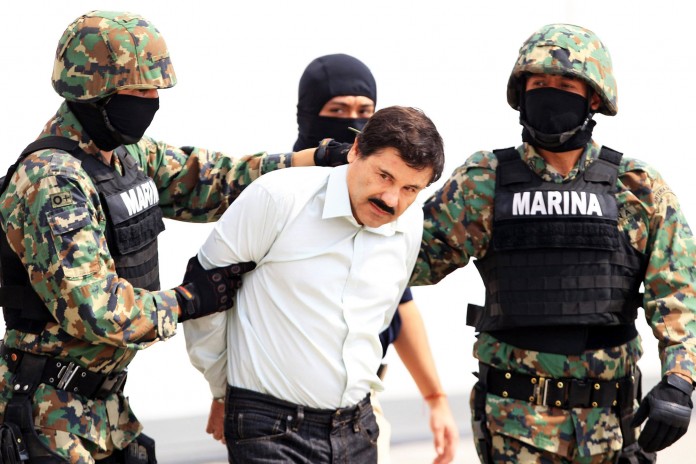 Joaquín “El Chapo” Guzmán, Mexico’s most infamous drug lord, has left his prison. Only this time he didn’t escape.

Guzmán, who has twice escaped federal prison in Mexico, was transferred early Saturday from the Altiplano maximum-security prison outside Mexico City — the same prison he tunneled out of last summer — to a new lockup in Ciudad Juarez, along the border with Texas.

Mexican authorities described the transfer as part of a regular shuffling of detainees to different facilities to help prevent escapes. Some 7,400 people have been moved around, a police implementation after Guzmán’s last breakout. They also said in a statement that they were working to reinforce security at Altiplano and Guzmán’s new prison, Cefereso No. 9.

But a former U.S. Drug Enforcement Administration official, Mike Vigil, said he had been told by Mexican authorities that Guzmán was moved because of fears about the security at Altiplano, considered the country’s most impenetrable prison.

“He was moved strictly because of security concerns,” said Vigil, a former chief of international operations who regularly follows the Mexican drug war. “I know it’s not going to be an internal threat, because they’re watching him like a hawk. Because [President Enrique Peña Nieto’s] administration knows a third escape by Chapo Guzmán would completely decimate the credibility of the Mexican government.”

Guzmán’s legal team has been aggressively opposing extradition to the United States, where Guzmán faces a variety of charges in several states for distribution of cocaine, heroin and methamphetamine, among other crimes.

Little has seeped out about how Guzmán has fared inside the Altiplano prison in the four months since he was recaptured in the Pacific coast town of Los Mochis, after trying to escape a military raid by fleeing through a sewer. His new cell had better surveillance cameras — unlike the cell with the blind spot behind the shower wall that Guzmán used to slip through a hole in the floor. His lawyers have told reporters that he had also been allowed fewer visitors.

Attorney Andrés Granados told the Mexican news outlet Milenio that his client had been moved without any prior notice to the legal team. Earlier this month, Guzmán’s visits had been suspended when the power went out in parts of the Altiplano prison where he had been held.

Vigil warned that the Ciudad Juarez prison was not as secure as Altiplano and that Guzmán’s Sinaloa drug cartel controls that drug-trafficking territory.

A Mexican security official denied that there was a security issue at Altiplano or that the government was preparing for Guzmán’s extradition but did not elaborate on the reasons for his transfer.