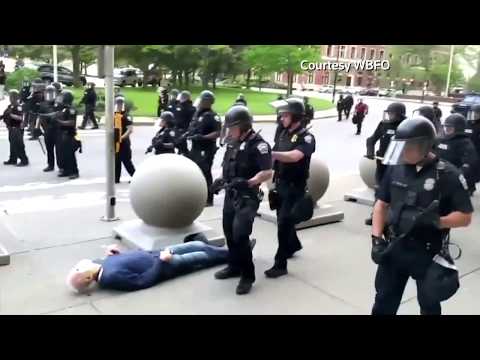 The elderly man who was violently shoved to the ground by Buffalo police on Thursday night is in a “serious condition” but is expected to recover, according to the top Erie County executive. Graphic footage of the incident showed the unidentified man, 75, being shunted to the sidewalk by cops in riot gear and then lying motionless as blood appears to gush from his right ear. Buffalo Police Commissioner Byron Lockwood ordered the immediate suspension of the two officers involved.

In an update on the man’s condition, Erie County Executive Mark Poloncarz wrote: “I’ve confirmed the 75 year old man injured tonight is in serious but stable condition…. While it is early, thankfully he is expected to recover. Simply put, the officers must be held responsible for their actions, not just fired.” Buffalo Mayor Byron Brown said he was “deeply disturbed” by the video and confirmed that the two officers involved have been suspended without pay. Read more at The Daily Beast.