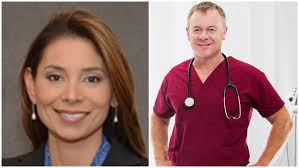 Two Boston doctors, engaged to each other, were found dead in their penthouse apartment Friday, according to law enforcement.

Richard Field, 49 and Lina Bolanos, 38, were both anesthesiologists at Boston-area practices, according to the couples’ respective employers.
Police arrested suspect Bampumim Teixeira, 30, after receiving 911 calls reporting a person with a gun on Dorchester Avenue in South Boston.
When officers confronted Teixeira in the building, he allegedly began firing at the officers. After a “violent struggle,” according to police, he was arrested and subsequently taken to the hospital.
Teixeira was charged with two counts of murder and will be held without bail. Read more at CNN.
{Matzav}