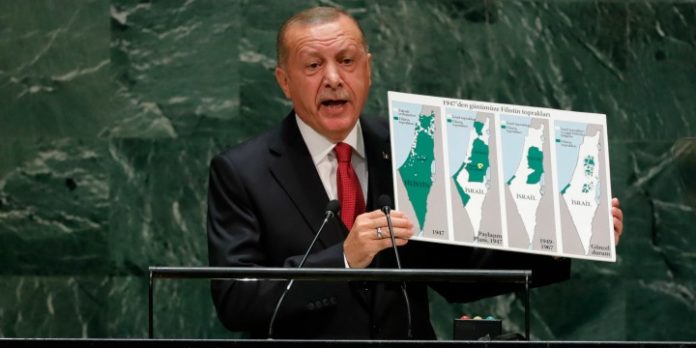 Turkish President Recep Tayyip Erdoğan said in a video message posted on social media on Monday that “we will not allow Palestinian lands to be offered to anyone.”

In the video, which was addressed to American Muslims in honor of the Eid al-Fitr holiday marking the end of Ramadan, Erdoğan said that the Har Habayis in Yerushalayim was a “red line” for all Muslims.

“I would like to reiterate that al Quds as-Sharif [the Temple Mount], the holy place of the three religions … is a red line for all Muslims in the world,” he said.

The appeal appears to be an effort by Erdoğan to mobilize the American Muslim against the U.S. government’s decision to allow Israel to apply its law to parts of Judea and Samaria and the Jordan Valley.

Israel is widely expected to start implementing sovereignty in parts of Yehuda and Shomron starting in July.