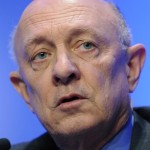 “Once Iran gets a nuclear weapon, and under this agreement it will, it’s only a question of speed and development, then you are going to have nuclear weapons proliferate throughout the Middle East,” Woolsey, chairman of the Foundation for Defense of Democracies, told “Newsmax Prime” host J.D. Hayworth. “The Arab states — such as Saudi Arabia, Egypt and others — are definitely going to end up with nuclear weapons.”

“The next time we have a major Middle Eastern crisis, let’s say five or 10 years from now, you could well have six of the countries involved, let’s say, having nuclear weapons,” he added. “The Mideast is crazy enough without nuclear weapons.”

But perhaps the biggest danger with Iran having a nuclear weapon is its ability to set it off from as high as 186 miles over the United States, said former top CIA analyst Dr. Peter Vincent Pry.

“This would be the detonation of a singular nuclear weapon,” he told Hayworth. “They will only need one detonated at high altitude — basically, to about 300 kilometers over the center of the United States.”

The blast would create an electromagnetic pulse (EMP), “which is like a super energetic radio wave that will destroy electronics, collapse the electric power grid,” Pry said. “It’s a way of basically destroying our electronic civilization.”

Leave a Reply to Not Again! Cancel reply