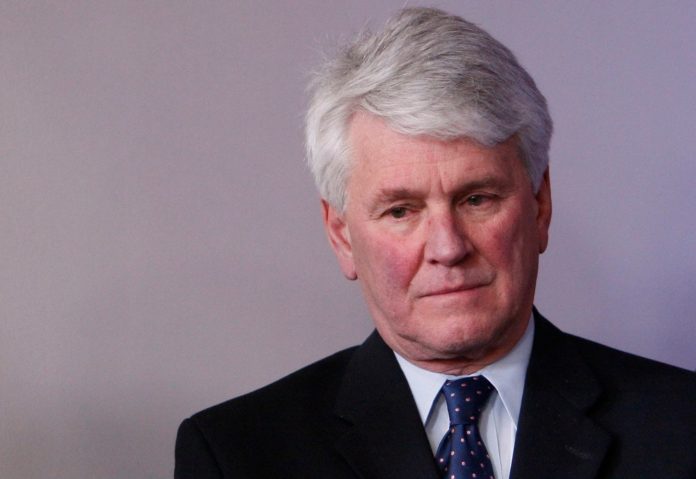 Attorneys for former White House counsel Gregory Craig said Wednesday that he expects to face federal charges in the coming days in regard to legal work he did for the Ukrainian government in 2012.

The expected indictment – which his attorneys called “a misguided abuse of prosecutorial discretion” – stems from work Craig did with GOP lobbyist Paul Manafort on behalf of the Ukrainian Ministry of Justice in 2012.

At the time, Craig was a partner at Skadden, Arps, Slate, Meagher & Flom, the law firm he joined after ending his tenure as counsel to President Barack Obama. Manafort, the former campaign chairman to President Donald Trump, pleaded guilty last year to charges related to his Ukraine lobbying.

In a statement, attorneys William Taylor and William Murphy said they expect Craig, 74, will be indicted by the U.S. attorney’s office in Washington at the request of the Justice Department’s national security division. That could not be independently corroborated. A spokesman for the U.S. attorney did not immediately respond to a request for comment.

“Mr. Craig is not guilty of any charge,” Craig’s attorneys said in their statement.

Craig resigned from Skadden in April 2018 amid a building investigation into whether the firm’s lawyers didn’t register as foreign lobbyists for their Ukraine engagement.

He would be the first prominent Democratic figure to be charged as a result of a foreign lobbying investigation spun out of special counsel Robert Mueller’s probe into Russia interference in the 2016 presidential campaign.

His indictment would represent a dramatic turn for a member of the country’s most elite legal circles. Craig attended Yale University’s law school with Bill and Hillary Clinton and later worked in the State Department and White House during Bill Clinton’s presidency. An early Obama supporter, he served for a year as his first White House counsel. He is also a veteran of the Washington-based law firm Williams and Connolly.

Last year, Mueller’s team prosecuted Manafort, who admitted that he hadn’t properly registered as a foreign lobbyist while working as a political consultant for Ukrainian President Viktor Yanukovych, whose 2010 campaign Manafort helped advise. Last month, Manafort was sentenced to a total of 7 1/2 years in prison for lobbying violations and financial crimes.

Craig’s firm was hired in 2012 by Yanukovych’s Justice Ministry to conduct a review of the prosecution of one of Yanukovych’s leading political rivals, Yulia Tymoshenko. The agreement included providing advice on improving prosecutions by the ministry, according to court filings.

Skadden produced a 187-page white paper that offered a mixed review of the trial and imprisonment of Tymoshenko, saying the analysis it conducted of the case was independent.

But human rights advocates said that the report had been engineered by Yanukovych’s government and that it whitewashed the jailing of his political opponent.

And Manafort eventually admitted that he and other lobbyists used the Skadden report as part of a broad effort to improve Yanukovych’s reputation in the West after the widely condemned jailing of Tymoshenko. Manafort agreed that they didn’t disclose their lobbying effort, which included disseminating the Skadden report to U.S. government officials.

Craig came under scrutiny in part for contact he had in December 2012 with reporters, particularly at The New York Times, to explain the content of the report.

After Skadden was mentioned in news coverage, the Justice Department sought information from the law firm about whether its work, including the media contacts, required the lawyers to have registered as foreign lobbyists.

In a letter sent to the Justice Department in October 2013 and obtained by The Washington Post, Craig wrote that his media contacts came in response “to inaccuracies in U.S. news reports” and that he was “in no way serving as an agent for Ukraine.”

In response, a Justice Department official sent Craig a letter in January 2014, indicating that the government agency found the firm had “no present obligation to register under FARA.”

But subsequently, as prosecutors began scrutinizing the work of Manafort and his associates in Ukraine, they reexamined the role of Craig’s firm, including whether Craig was honest during his interactions with the Justice Department over his registration requirements in 2013.

Skadden in January reached a settlement with the Justice Department, admitting it should have registered for its work in 2012 and 2013, and agreed to turn over the $4.6 million in fees it made for the report in exchange for facing no criminal charges. In its settlement, Skadden agreed that the Justice Department’s 2014 finding that the firm did not need to register came after the agency relied on “false and misleading oral and written statements” made by Craig.

In their statement Wednesday, Craig’s attorneys said that his work on the Tymoshenko case came “as an independent expert on the rule of law, not as an advocate for the client” and that he refused requests to participate in Ukraine’s lobbying around the report.

They said that Craig “did not lie to his former firm or the government” and that his contact with The New York Times was intended to ensure that the newspaper accurately summarized the way the report criticized Tymoshenko’s trial.

The Ukrainian government reported that Skadden was paid $12,000 for the report, but prosecutors have said Manafort used an offshore account to help route more than $4 million to the law firm to pay for the work.

Another Skadden lawyer, Alex van der Zwaan, pleaded guilty in 2018 to lying to the FBI about his work on the report, agreeing that he had slipped an early copy to Manafort to assist in his pro-Yanukovych lobby efforts and that he later deleted emails related to the effort. He served 30 days in prison.

Mueller’s office, which prosecuted Manafort, referred Craig’s case last year to prosecutors in Manhattan as Mueller worked to bring his investigation to a close, people familiar with the matter have said. The case was then transferred back to prosecutors in Washington.

Separately, prosecutors in New York have been investigating whether FARA rules were violated by two other prominent Washington figures: Tony Podesta, a Democratic lobbyist who once owned one of Washington’s leading firms, and Vin Weber, a former Republican congressman, who helps lead the Washington office of Mercury.