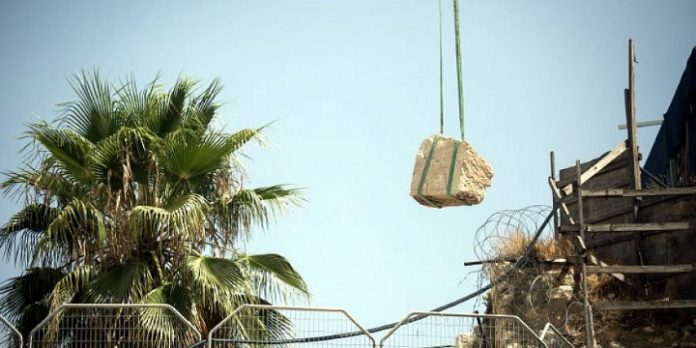 The 2,000-year-old slab of rock that dislodged from a section of the Kosel on Monday, nearly crashing down on a 79-year-old woman at prayer, was removed from the area by crane two days later.

An official from the Western Wall Heritage Foundation—the government body charged with preserving the wall site, including its tunnels—told JNS that the rock was set down near the Mughrabi Bridge that connects the Kosel Plaza to the Har Habayis.

The official said that archeologists and engineers from the Israel Antiquities Authority arrived on Wednesday to begin determining what to do with the rock.

Rabbi Shmuel Rabinovitch, rabbi of the Kosel, will also be involved in deciding the fate of the stone, as it is considered a religious item of historical significance.

The rock, estimated to weigh more than 200 pounds, fell from the southern section of the wall above a prayer platform within the egalitarian prayer area. The area is now closed off to worshippers, as the platform sustained damage during the impact.

Experts from the Antiquities Authority will examine the wall itself to determine the cause of the incident and to see if there is potential for other rocks in the area to dislodge.