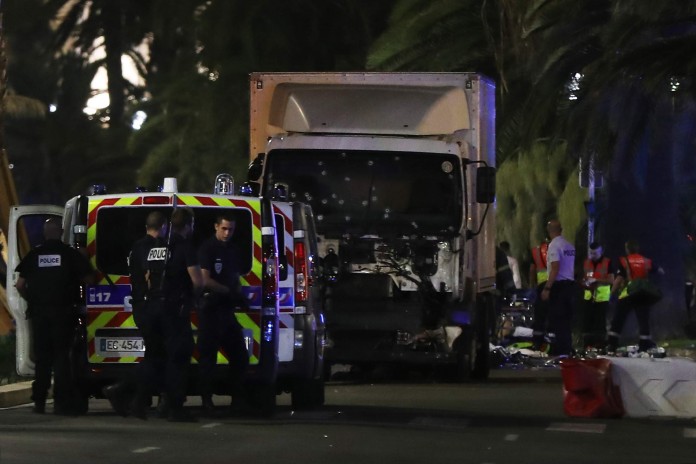 It was a lovely night in Nice, Damien Allemand recalled. Thousands of people thronged the sea-side promenade that skirts the edge of the city, faces tilted upward to watch fireworks explode overhead in honor of France’s favorite holiday. Light and music spilled from restaurants, cheers punctuated the bursts of fireworks.

Allemand, a reporter for Nice Matin, a local newspaper, was on his way to leave when he heard the crack of gunshots cut through the revelry. A fraction of a second later, a huge white truck went roaring past. It plowed into the crowds, as though it intended to hit as many people as possible.

“I saw bodies flying like bowling pins in its path. Heard sounds, howls that I will never forget,” Allemand wrote in a post on the website Medium. The “truck of death,” as he called it, had passed just several meters from where he stood.

For a moment, Allemand was frozen. People streamed past him, screaming, crying. He heard someone yell, “get to shelter.” Another pleaded, “where is my son?”

Finally, he turned and ran.

The attack in the French Riviera city of Nice Thursday night left at least 80 people dead and 18 more critically injured. The driver of the truck mowed down dozens of people and fired on others before being shot down by police, regional president Christian Estrosi said.

The bloody attack came at the end of one of France’s most important holidays, Bastille Day, which came at the start of the French Revolution 226 years ago. All around the country, people marked the occasion with military parades and fireworks displays.

Maryam Violet, an Iranian journalist on vacation in Nice, told the Guardian she was part of the crowd watching the fireworks on the Promenade des Anglais.

“It was so peaceful. It was a festivity vibe,” she said.

The show had just ended, and people were beginning to disperse, when the truck came barreling toward them.

“You just see this big white . . . truck,” said Tony Molina, a witness who spoke to CNN. “I can’t see the driver but its just kind of going at different angles, so it’s going from left to right, continuing at about 25, 30 miles per hour.”

Estrosi, who is a former mayor of Nice and currently president of the Regional Council of Provence-Alpes-Cote d’Azur, told French TV that the attack was “clearly premeditated.” Authorities later found arms and explosives inside the truck.

The crowd, which contained both tourists and Nice natives, fled onto side streets and into restaurants. Videos taken from the scene showed terrified people screaming in a mix of languages. Allemand, the journalist, said that he took cover in a nearby restaurant and waited for the volley of gunshots to end.

When he emerged, the promenade was empty, he wrote: “No noise. Not a siren. No cars.”

He walked back toward the spot where the truck had come to rest. The windshield was riddled with bullets. Nearby, a man was crying.

“The dead are everywhere,” the man said.

“He was right,” Allemand wrote. “Just behind him, bodies every five meters in the road, limbs . . . blood.”

Alain Boudail, owner of the restaurant where Allemand took shelter, told Time the attack was “carnage.”

“I could hear screams, cries and it looked like bowling, people were being thrown in the air two or three meters high,” he said. “In front of my restaurant there were at least ten people laying on the street, dead.”

The High Club, a night club next door, had been turned into a field hospital, he said. So had the lobby of a swanky hotel called Negresco, where some of the injured were evacuated.

On the promenade, blood pooled around bodies covered by blankets and foil sheets. Horror-struck people knelt by the bodies of the dead, while first responders tended to others. A Reuters photographer captured an image of a small figure covered in shining gold foil. A child’s doll lay beside the body.

“I was walking for nearly a mile, and there were dead bodies all over the place,” Violet told the Guardian. “I think over 30 dead bodies are on the ground and lots of people are injured.”

Violet said she saw two sisters and a brother from Poland who had lost two siblings, and another family whose mother had died. She guessed that the family was Muslim, because some members were wearing headscarves.

“In Arabic, they were saying she’s a martyr,” Violet said.

Allande wrote that he wanted to stay and help, but “froze again.”

“At that moment I lost courage,” he said. He returned to his scooter and drove away as the ambulances began to arrive.

“This evening,” he concluded, “was horror.”