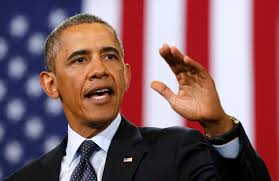 “We flood communities with so many guns that it is easier for a teenager to buy a Glock than get his hands on a computer or even a book.”

We received numerous reader requests for a fact-check into this claim, almost immediately after Obama said it at the memorial service for Dallas police officers killed by sniper fire on July 7.

It reminded us of a similar claim by Obama in March 2015, when he said, “There are neighborhoods where it’s easier for you to buy a handgun and clips than it is for you to buy a fresh vegetable.” In fact, he said a version of the comparison of guns and books at the time, as well. We found inaccurate a series of his odd exaggerations about guns, including the comparisons to buying vegetables. https://www.washingtonpost.com/news/fact-checker/wp/2015/03/12/obamas-odd-series-of-exaggerated-gun-claims/?tid=a_inl (After the fact-check published, some readers pointed out that he may be referring to “food deserts,” or areas of the country where it is difficult to buy fresh vegetables.)

This time, Obama said a Glock, a type of handgun, is easier for teens to obtain than books or computers. Readers wanted to know: Really?

Federal law prohibits licensed firearms dealers from selling a handgun, such as a Glock, to people under 21 years old. It prohibits unlicensed people, like family, from selling or transferring handguns to anyone under 18. In most states, you need to be at least 18 to purchase and own a handgun.

Public libraries, on the other hand, generally don’t have an age limit or a background check for children to get a library card and access books and computers for free.

John Lott, a gun-rights analyst who runs Crime Prevention Research Center, sent us this calculation as an example of access to free public resources for books and computers: There are 80 public libraries and 95 public high schools in Chicago, within a city of about 230 square miles. That comes out to a library or high school every 1.3 square miles, albeit not equally spread out throughout the city.

The White House pointed us to the full context of the claim to say Obama was making “the serious point about the lack of opportunity and ready access to guns in way too many places”:

“We also know what [Dallas Police] Chief [David] Brown has said is true, that so much of the tensions between police departments and minority communities that they serve is because we ask the police to do too much and we ask too little of ourselves.

“As a society, we choose to under-invest in decent schools. We allow poverty to fester so that entire neighborhoods offer no prospect for gainful employment. We refuse to fund drug treatment and mental-health programs. We flood communities with so many guns that it is easier for a teenager to buy a Glock than get his hands on a computer or even a book.

“And then we tell the police, ‘You’re a social worker; you’re the parent; you’re the teacher; you’re the drug counselor.’ We tell them to keep those neighborhoods in check at all costs and do so without causing any political blowback or inconvenience; don’t make a mistake that might disturb our own peace of mind. And then we feign surprise when periodically the tensions boil over.”

The White House provided supporting information that addresses lower-income areas that have limited bookstores or educational resources, compared with higher-income areas. We received several news articles portraying anecdotes from people in lower-income communities where buying guns is “as easy as buying a pack of gum,” or where it’s “easier to buy a gun or drugs here than food.”

In Englewood, a Chicago neighborhood, teens have such easy access to illegal guns that they can get one for free or as little as $25 with a simple phone call. A news report by WBEZ Chicago interviewed teenage boys who have bought several guns from fellow gang members or through family or friends, starting when they were as young as 12.

Further, the 80 branches of public libraries in the city this year plan to distribute more than 1 million books “to address a persistent lack of access to books in low-income neighborhoods. . . . There, on average, 300 children share a single book. For middle-income neighborhoods, the ratio of books per child is 13 to 1, library officials said.” According to the Chicago Tribune: “The challenge is that there are many homes in Chicago that do not have age-appropriate books for kids,” Chicago Public Library Commissioner Brian Bannon said. “Obviously, you can take a library book home, but owning your own is very different.”

A 2016 New York University study identified “book deserts” in poor neighborhoods of Detroit, Washington, D.C., and Los Angeles, concluding that there were fewer bookstores in high-poverty areas where families can buy children’s books.

But none of the information we received from the White House directly made a connection between the ability of teens to buy handguns and their access to books or computers.

This is a catchy talking point that people obviously paid attention to, but it doesn’t make much sense. Literally speaking, not all states allow people under 21 years old to buy a handgun. And as far as we know, there’s no minimum age or a background check required to get a book or use the computer for free at a public library.

The White House noted that in the context of the speech, Obama was speaking about the lack of opportunity and ready access to guns in many communities, particularly lower-income areas. It’s accurate to say there are communities that lack education, employment and health-care resources. And it’s fair to say that in some communities, there is ready access to illegally obtained guns for teens who can get them easily from a fellow gang member, friend or a family member — perhaps without even having to leave their home or their street.

But the president can make that point without resorting to such an exaggerated claim based in no real statistics, and which does nothing but distract the public.