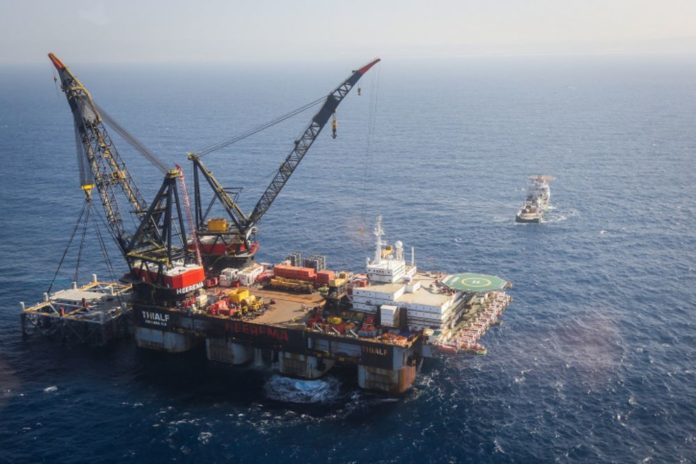 i24 News – An investigation by i24NEWS senior military and security correspondent Matthias Inbar has revealed the Hezbollah drone footage of the Karish gas rig to be a fake.

The Lebanese Shiite terrorist group on Sunday published a video of what they claimed was drone footage of the Karish gas rig in Mediterranean waters. The unarmed drone and two other drones were shot down by the Israeli military on Shabbos.

However, in a Twitter post Inbar provided a link to a promotional YouTube video from Energean, the owner of the gas rig, which showed the exact same aerial footage that was seen in the Hezbollah video. The only difference was that Hezbollah added some drone target graphics.

Hezbollah on Shabbos launched three drones headed toward Karish that Lebanon claims is in disputed waters, but that Israel says is entirely in its exclusive economic zone.

The Lebanese group on Sunday released photos taken by its drones as well as a short video of just a few seconds showing the gas field platform that the i24NEWS investigation shows to be a fake.

An Israeli military spokesperson on Sunday said that Israel’s sovereignty was not violated during the incident, stressing that the drones were shot down over Lebanese territorial waters recognized by the United Nations.

One of the devices was intercepted by an F-16 fighter jet and the other two by Barak 8 missiles launched from a warship. According to defense officials, all three were stopped before approaching the gas field.