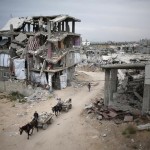 A Gaza woman said she paid a doctor $50 to write a fake medical report, hoping to join the hundreds of Palestinian patients allowed out of Gaza each month for treatment, mostly to Israel and the West Bank.

Officials involved in the issuing of permits say a rise in fraudulent referrals has slowed approval for genuine cases.

“We have a lot of cases of both fake papers and fake requests, and also just people that don’t really need to get this treatment outside,” said the Israeli official who heads the permit division. He said the unit has a list of about 20 “problematic doctors that are very, very generous in giving papers and signing them, with no real need.”

A surgeon at Shifa Hospital in Gaza City said buying fake or exaggerated diagnoses was “becoming a norm,” with lab technicians and hospital administrative staff serving as “brokers.” The doctor said a colleague had gotten a medical transfer for a hemorrhoid that could have been treated in Gaza in order to go to Germany for a job.