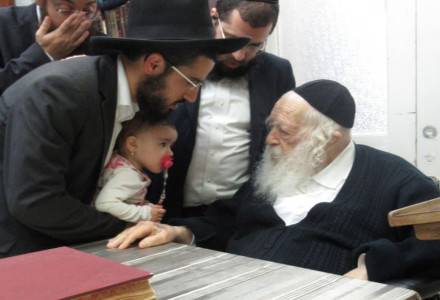 Avraham Tawill is a husband and father of 5 kids. TheTawills were a happy “normal” family until about 2 years ago, when an unexpected tragedy struck. Avraham’s infant daughter Rivky suffered a stroke, a rarity for a child. The stroke caused severe neurological damage to her eyes and the entire right side of her body. Two years later, she is still in an expensive rehabilitation program. Still the young parents hoped that after the stroke, the worst was behind them. What they could not know was that this was only the first chapter in the story of this poor family.

While their daughter was in the hospital, their son Yitzchok Chaim was diagnosed with an eating disorder which causes him to lose weight whenever he eats. Yitzchok has lost a dangerous amount of weight and was hospitalized. He now requires an expensive formula to regain and stabilize his weight. To make matters worse, Rivky was further diagnosed with FMF which causes fevers and painful inflammation to her joints. Since there currently exists no treatment or even sedatives to ease her pain, the Tawills have to watch their baby girl suffer all day, every day.

Because the parents need to simultaneously care for two hospitalized children and three at home, they are unable to work and as a result live in abject poverty. They live in a cramped, 27 meter apartment which is barely enough for a young couple, let alone a pair with 5 kids. There is no room for proper mattresses for the young ones, so they first fall asleep on their parents bed and are then transferred to the floor.

The challenges facing Avraham and his wife have caused them to struggle severely. Donations are being accepted via their family emergency fund.