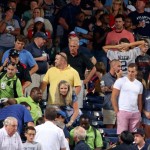 A man in his early 60s died after falling out of the upper deck of Turner Field at a Yankees-Braves game last night. No fans were hurt in the lower level where the man fell.

Witnesses say he was yelling at Alex Rodriguez when he lost his balance falling 50 feet and hitting a railing on the way down.

The game continued as medical personnel attended to the man who was pronounced dead at Grady Memorial Hospital. Read more at ESPN.