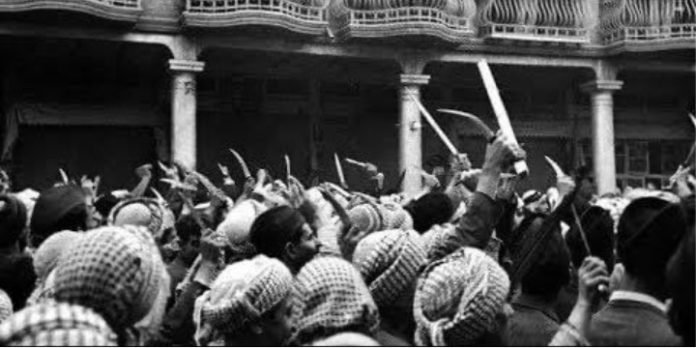 Jewish leaders and organizations on Monday marked the anniversary of the 1941 Baghdad pogrom known as the “Farhud,” which began the ethnic cleansing of the millennia-old Iraqi Jewish community.

Following a pro-Nazi coup led by nationalist Rashid Ali al-Kailani and Palestinian leader and Nazi collaborator Hajj Amin al-Husseini, anti-Jewish riots broke out in Baghdad on June 1, 1941. Before being suppressed by the British military, the pogrom left at least 180 Jews dead.

Over the next decade, almost all of Iraq’s around 135,000 Jews fled the country, most of them going to the new State of Israel.

The director-general of the Israeli Ministry of Foreign Affairs, Yuval Rotem, wrote on Monday, “Today we commemorate the #Farhud, the bloody massacre of Iraqi Jews. Following the pogrom, the majority of #Iraq’s vibrant Jewish community, which dated back to 586 BC, has found its safe haven in Israel. We will forever remember those murdered in the Farhud.”

The organization JIMENA — which advocates for Jews of Middle Eastern and North African origin — related the Farhud to the ongoing protests against police violence in the US, writing, “On this 79th anniversary of the anti-Jewish pogrom in Baghdad, Iraq known as the Farhud we decry police brutality and indifference that plagues our country.”

“Jews from Arab countries are no stranger to systemic discrimination and we demand more for African Americans,” the group wrote.