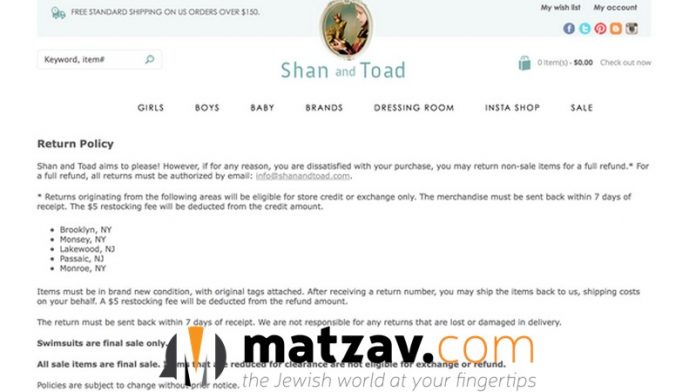 [See Matzav’s earlier stories on this here and here.]

According to Porrino, Shan and Toad agreed to rescind an advertised policy that excluded from refund eligibility any returns originating from addresses in Lakewood and Passaic – two communities that contain large populations of frum Yidden.

Shan and Toad agreed to drop its exclusion of Lakewood and Passaic buyers from refund eligibility after two agencies within the Attorney General’s Office – the Division on Civil Rights and the Division of Consumer Affairs – contacted the retailer to advise that it appeared to be in violation of state anti-discrimination and consumer protection laws.

Under the settlement, Shan and Toad has permanently eliminated the old policy of not offering refunds to buyers from Lakewood and Passaic, and agreed to develop and publicize a revised return policy. The new policy, according to an Assurance of Voluntary Compliance (AVC) agreement signed recently by the company, must avoid any imposition of “more restrictive conditions” on certain customers because of where they live if it has the “effect of discriminating based on any protected class … such as religion.”

“This settlement sends a clear message to on-line and mail-order sellers that red-lining – i.e., treating customers from certain areas less favorably based simply on their address — is not acceptable in New Jersey when it has the effect of discriminating against people based on their faith or any other protected category,” said Attorney General Porrino.

Under the settlement, Shan and Toad makes no admission of wrongdoing.