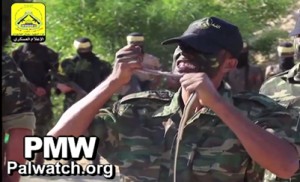 Mahmoud Abbas’ Fatah movement apparently sees biting and chewing on a snake as a sign of military prowess – and included it in a new terror promotion video it posted on its Facebook page.

It seems that the snake eating exemplifies what it takes to be “heroes of a mighty people” – the lyrics of the song in the background as the Fatah fighter eats the snake. [Official Facebook page of the Fatah Movement, Nov. 16, 2015].

The video also shows Fatah terrorists practicing the kidnapping of an Israeli through a tunnel, as well as other images of terrorists in training.

The following are the words of an excerpt from the Fatah video:

“These are the soldiers of the Nidal Division
Sons of Yasser [Arafat], Abu Amar
[Visual: Practicing kidnapping of Israeli soldier]
Lions standing guard in the battle field…
They inflicted disasters upon the oppressor
They are the heroes of a mighty people…
Volcanoes and fires against the occupier
A sniper unit in the battalions does not fear death…
They are the heroes of a mighty people…
Using RPGs and booby-traps, they did not leave even one settlement.”
[Official Facebook page of the Fatah Movement, Nov. 16, 2015