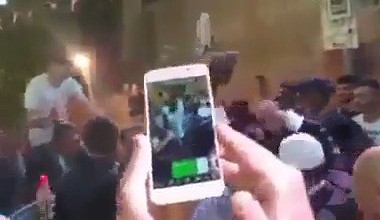 Fatah booted the council chief of the West Bank village of Deir Kadis Friday after four Israelis showed up at his son’s wedding celebration.

Radi Nasser was also removed from his job at the Palestinian Authority education ministry after videos emerged showing the Jewish men at the Thursday event, Haaretz reported. Nassar denies inviting the Jewish guests and says he threw them out when he learned of their presence.

Some of the Palestinians at the wedding filmed the Jews, and the video clips quickly spread on Palestinian social media, sparking outrage, Haaretz reported.