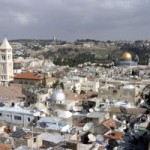 The father of a 19-year-old Palestinian man who went on a stabbing and shooting spree in Yerushalayim on Friday said he was “proud” of what his son did, apparently under the pretense of religiosity, the International Business Times reported on Thursday.

“I am proud of my son and what he did − he has done what 1.5 million Muslims have failed to do,” said Shafiq Halabi, who’s son, Muhannad, was shot dead by Israeli police last Shabbos, after he fatally stabbed two men — off-duty soldier Aharon Bennett (21) and Rabbi Nechemia Lavi (41) — as well as wounding Aharon’s wife (22) and two-year-old son.

Shafiq noted that his son was a “polite,” albeit slightly rebellious, child and said he was unaware of his son’s intentions when he left him at the bus stop in Ramallah earlier that day, bound for the university at which he was a student.

According to the Times, Halabi had posted messages on his Facebook wall heralding the outbreak of a “third intifada,” or armed resistance against Israel, especially over ongoing clashes at the Har Habayis.

The security situation across Israel has crumbled over the past week, with several fatal attacks against Jews in the West Bank and in and around Yerushalayim, as well as stabbings with weapons ranging from a screwdriver to kitchen knives, outside the Tel Aviv IDF Headquarters and targeting military personnel in Kiryat Gat.

Israeli Prime Minister Bibi Netanyahu earlier this week laid out a series of security measures meant to tackle the concerning rise in terrorist attacks — many of them labeled “lone-wolf” attacks — and blamed Palestinian Authority President Mahmoud Abbas for fanning the flames of violence by accusing Jews of desecrating Islamic holy places like the Al-Aqsa Mosque.

Among the measures are the expediting of the razing of terrorists’ homes, increased use of administrative detention and dispatching more security personnel in flashpoint areas. Security forces erected several metal detectors around the Old City of Yerushalayim on Thursday, in an attempt to stem the rising tide of attacks.