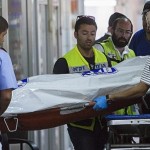 A chilling letter to a Rechasim Council member just days before the father from Rechasim committed suicide clearly points out his rage and frustration caused by his daughter’s rejection from first grade, Kikar reports.

“There is no limit to humiliation – I am furious, belittled and disparaged,” writes the desparate and hopeless father.

The letter was publicized by Wallah News by Yaki Adamkar.

In another, similar letter, the father writes that he has begun to feel that everyone has turned against him, and his little daughter. She understands what we are going through – a belittling and humiliating process. She keeps inquiring as to where she will learn and why she was not accepted. This is not how a little girl should begin her first steps of her education.

In reply to the claim that the family’s spiritual level is not on par, the father wrote: “This is a blood libel.” For the complete letter in Hebrew, click here.