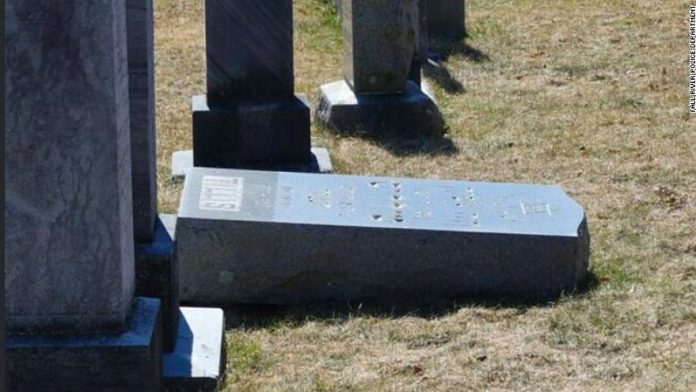 Some 59 gravesites at a Massachusetts Jewish cemetery were vandalized with swastikas and anti-Semitic words, and some gravestones were toppled over, according to the Fall River Police Department.

The FBI has offered to help with the investigation, said police chief Albert Dupere.

“They could offer additional detectives or investigators to help with interviews or technical assistance,” he said. “We’re still canvassing the area looking for potential witnesses and video to make sure nothing was missed.”

No leads or suspects have been identified, added Dupere.

“Something on this scale, I can’t remember seeing something like this before,” he said. “I think it’s awful that this should ever happen anywhere, let alone here in Fall River.”

The New England branch of the Anti-Defamation League is offering a $1,500 reward, while Congregation Adas Israel is offering one that is currently $12,000, in part due to receiving an anonymous donation, for information leading to the arrest of those responsible.

“It’s unfortunate that people would do such hateful things to deceased members of our community and also affect the lives of those who are still here with us, who now have to pick up the pieces,” said Mayor Jasiel Correia II.

Members of the Massachusetts congressional delegation also condemned the vandalism.

“None of this is harmless,” said Rep. Joe Kennedy. “Beyond the hurt for the Fall River families whose loved one’s tombstone was defaced, anti-Semitism in any form breeds violence in our communities. We stand united in rejecting these acts of anti-Semitism and hatred.”

Today at one of Fall River’s Hebrew cemeteries I counted 30 gravestones that were defaced with swastikas, anti-Semitic language or a combination of the two.

So far no arrests. On one gravestone was the following: “Oy vey! This is MAGA country.”https://www.heraldnews.com/news/20190318/jewish-cemetery-gravestones-defaced-with-swastikas-anti-semitic-messages …

Sen. Elizabeth Warren wrote, “Anti-Semitism has no place in Massachusetts or anywhere else in this country. I join with the people of Fall River in condemning this hateful act.”