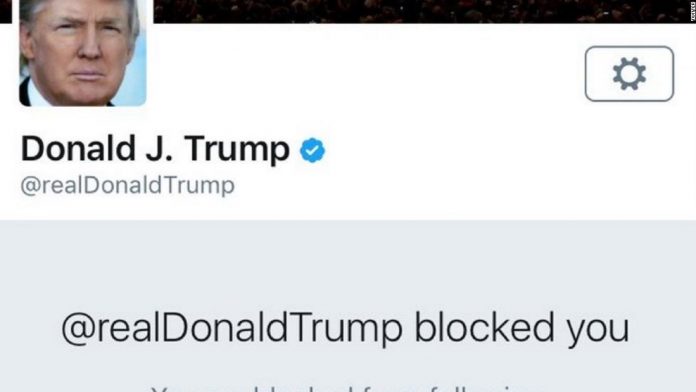 President Donald Trump’s Twitter habits are up for argument Tuesday morning, as federal judges consider whether he and other elected officials can block critical voices from their social media accounts.

Justice Department lawyers, defending the president, say the @realDonaldTrump account is Trump’s personal platform to share his views, not an extension of the federal government. The president, they say, can choose to silence followers “he does not wish to hear” without violating the First Amendment.

The Trump administration is appealing a District Court judge’s ruling from May siding with seven individuals blocked on Twitter after they posted comments critical of the president and his policies. Judge Naomi Buchwald of the U.S. District Court for the Southern District of New York said the comment threads attached to Trump’s tweets, open to anyone without restrictions, are a public forum. Blocking individuals from those interactive spaces because of their views, she said, is unconstitutional.

The Supreme Court has not directly addressed how the law applies to expanding digital spaces for public debate, and the case involving the president’s Twitter account is a high-profile legal test.

Free-speech advocates say the online comment section of an elected official’s social media site is no different from a traditional town hall meeting. Those spaces, they say, are subject to First Amendment protections that allow citizens to respond directly to their government officials and engage with others about public policies.

“Blocked users are denied the opportunity to participate fully in the rapid, ongoing conversations occurring on Twitter and other social media,” attorneys from Georgetown University Law Center’s Institute for Constitutional Advocacy and Protection wrote in a brief in support of the blocked followers. “. . . Blocking users based on their opinions poses the very dangers that the First Amendment’s ban on viewpoint discrimination has long sought to prevent: allowing the government to silence its critics, foster warped perceptions of officials’ popularity, and chill dissenting voices who may avoid speaking out for fear of reprisal.”

Among the Twitter users blocked by Trump and expected to attend the hearing Tuesday at the U.S. Court of Appeals for the 2nd Circuit are a District of Columbia writer and legal analyst; a University of Maryland professor; a surgery resident from Nashville and a comedy writer from New York. They are represented by the Knight First Amendment Institute at Columbia University.

Lawyers for the blocked individuals say the case is not about Twitter, a private company, but about how Trump uses Twitter as president. He routinely takes to Twitter to announce government appointments and dismissals and his administration’s policies. Then-press secretary Sean Spicer told reporters in June 2017 that Trump’s tweets should be considered “official statements by the president.” The National Archives has said Trump’s tweets must be preserved as presidential records.

In response to the lower court’s ruling, the president unblocked the seven followers and then appealed. The Justice Department in court filings drew parallels between the president’s personal Twitter account and the physical properties he owned before taking office. Just as the Bushes have Kennebunkport and the Kennedys have Hyannis Port, a president’s residence – or social media account – does not become government property when the president issues public statements or conducts government business there, Justice Department lawyers contend.

The First Amendment prevents the government from blocking or excluding views it disagrees with in what is known as “viewpoint discrimination.” Elected officials throughout the country are learning to navigate how those principles apply to their online interactions with constituents.

In January, the Richmond-based U.S. Court of Appeals for the 4th Circuit became the first appeals court to consider the similar question of whether free-speech protections prevent public officials from barring critics from their social media feeds. The court unanimously held that a Virginia official could not block critical comments from a constituent on the Facebook page she uses to conduct government business.

The 4th Circuit said the official’s page had ” ‘the power and prestige of h[er] state office’ ” and that she had “created and administered the page to ‘perform[] actual or apparent dut[ies] of h[er] office.’ ” Banning the critical commenter, the court said, amounted to “an effort ‘to suppress speech critical of [such members’] conduct of [their] official duties or fitness for public office’ further reinforces that the ban was taken under color of state law.”