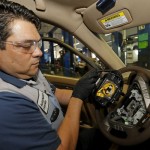 Federal regulators will levy as much as $200 million in fines against Takata, the Japanese manufacturer of faulty airbags.

The National Highway Traffic Safety Administration said Tuesday it will issue a $70 million penalty to the company for its failure to disclose defects in a timely manner. An additional $130 million could be levied if Takata fails to comply with a consent order.

The company’s airbags have come into question after 12 auto makers have recalled more than 19 million vehicles with the safety device since 2008. Read more at The New York Times.