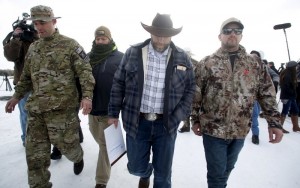 A federal official told reporters that they will cut off power to the wildlife refuge in Oregon that has been taken over by armed militiamen.

Cutting off power would expose the protesters—who are led by Ammon and Ryan Bundy in their third day of occupation and say they’ll stay for months—to freezing temperatures.

“It’s in the middle of nowhere,” an official told the newspaper, adding, “And it’s flat…cold up there.” Read more at The Guardian.