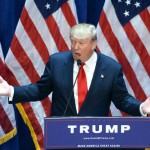 During Thursday night’s first GOP debate, Carly Fiorina took aim at fellow presidential candidate Donald Trump, saying, “I didn’t get a phone call from Bill Clinton before I jumped in the race…maybe it was because I didn’t give a donation to his foundation or donate to his wife’s Senate race.”

Fiorina also pointed out that Trump has flip-flopped on issues including amnesty, abortion, and health care.

Trump will debate later tonight with the other GOP candidates who ranked in the top ten in national polls. Read more at CNN.