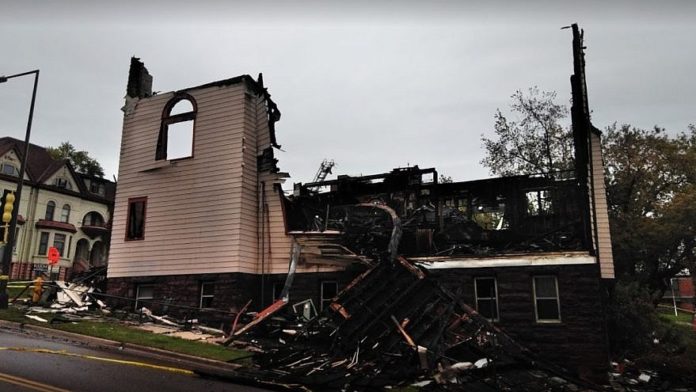 Firefighters managed to salvage Torah scrolls from a 120-year-old synagogue in Duluth, Minn., before an overnight fire on Monday that started in a storage room wound up destroying the building.

Leaders of Adas Israel Congregation, Duluth’s oldest-surviving Modern Orthodox Jewish synagogue, guided firefighters as they removed artifacts from the basement of the synagogue, according to the Duluth News Tribute.

“This is a huge deal,” said assistant fire chief Dennis Edwards. “There are some things that are not replaceable.”

At a news conference late Monday afternoon, it was reported that no accelerants were found at the scene. An investigation is under way.

It was also reported that eight of the synagogue’s 14 Torahs were saved, although board member Mike Baddin, later said there was some ambiguity about the number. He said he placed half of the scrolls in storage and half in someone else’s home.

Firefighters carried the scrolls out in plastic containers to protect them from water, said Baddin, adding “the miracle was that they were found intact. Everything else there was wet, and they were in a cabinet, and the cabinet apparently was sealed on the top.”

He also noted that most of the congregants grew up there and have been associated with the synagogue most or all of their lives.

The fire began at just before 2:30 a.m. at the Adas Israel synagogue, the local CBS affiliate WCCO reported.

Duluth Assistant Fire Chief Brent Consie said the synagogue’s structure was “pretty much a total loss” following the fire, and officials have not confirmed what caused the blaze. Two “people of interest” were interviewed, according to Police Chief Mike Tusken, though are not being considered suspects. He also said there was no indication that an explosion had occurred at the synagogue.

“I’ve been to 6,000 services in that building, so to have that stop is going to be quite an adjustment,” said Phillip Sher, immediate past president of board. “Watching the Star of David come down and the synagogue fall to the ground was very, very saddening. It’s a shocking event.”

Where members will go for the upcoming holidays remains to be seen. Temple Israel has invited congregants in, as has the local Chabad center.

Rabbi Mendy Ross, co-director of the nearby Chabad of Duluth, reached out to the congregation on Facebook and personally, saying “we were shocked and devastated by the news of the fire. The loss of any synagogue is always a tragedy, not to mention one that holds so much history to this region. We will open our hearts and our doors to Adas Israel, and help in any way we can.”