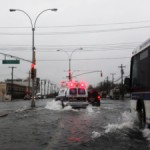 [Photos below.] Hours before one of the largest storms on record makes landfall in southern New Jersey this evening, Hurricane Sandy was speeding up and lashing the East Coast, pushing floodwaters in low-lying areas from Maryland to New York, bringing transportation systems to a halt and snapping electrical connections.

Even though the superstorm was still about 200 miles offshore, Sandy’s relentless march to land sped up to 28 mph, according to the National Hurricane Center. Flooding was reported in southern New Jersey and along the coastal areas in Manhattan where highways were closed as the East River continued to rise. More than 150,000 people were without power in New Jersey, Long Island and parts of Connecticut.

See below for initial photos of the storm: