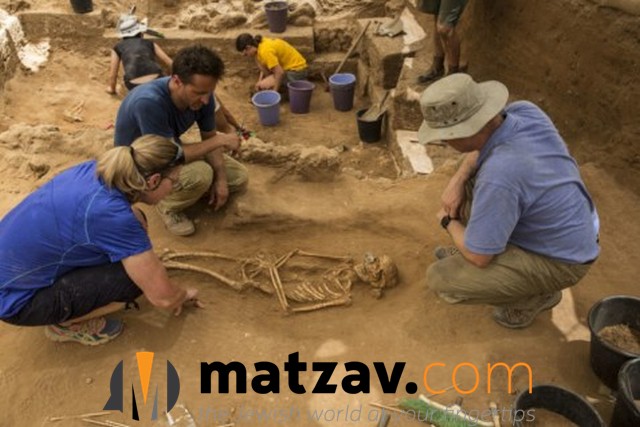 “After decades of studying what the Philistines left behind, we have finally come face to face with the people themselves,” said Daniel Master, a professor of archaeology at Wheaton College. “With this discovery we are close to unlocking the secrets of their origins.”

Archaeologists and scholars have long searched for the Philistines’ origin. Artifacts found in the cemetery, which date back 2,700 to 3,000 years, may support the biblical account of the Philistines as migrants who arrived on the shores of ancient Israel from western lands in approximately the twelfth century BCE.

“Ninety-nine percent of the chapters and articles written about Philistine burial customs should be revised or ignored now that we have the first and only Philistine cemetery found just outside the city walls of Tel Ashkelon, one of the five primary cities of the Philistines,” said Lawrence Stager, Dorot Professor of the Archaeology of Israel at Harvard University.

The discovery was made by the Leon Levy Expedition to Ashkelon more than thirty years after the excavation began. The digs that took place in Ashdod, Ekron, Ashkelon, and Gath have shown how culturally distinct the Philistines were from their Israelite contemporaries.

Philistine burial practices were not like those of the Bronze Age Canaanites, nor were they similar to burial practices in later Iron Age Judea. The Philistines buried their dead primarily in pits that were dug for each deceased individual: male or female, adult or child. Later, more bodies were sometimes placed in the same pit, which was dug again along roughly the same lines, but the new remains were interred with their own grave goods. The cemetery was also found to contain evidence of cremations, together with pit interments and multi-chambered tombs.

After quelling Bar Kochba’s revolt in the Roman province of Judaea in 135 CE, Emperor Hadrian renamed the area Syria Palaestina.

Research on artifacts found at the site, including bones, ceramics, jewelry and weapons, may connect the Philistines to related populations elsewhere in the Mediterranean Basin. Bone samples taken from the site are also being tested in order to ascertain the Philistines’ origins.

Most of the items found in the graves were storage jars, small bowls, and decorated juglets filled with what is believed to have been perfumed oil. While bracelets and earrings were found upon some of the remains and weapons with others, most of the individuals seem not have been buried with personal items.

The discovery was made in Ashkelon, a key port and maritime trade center from the Bronze Age to the Crusades, when it was destroyed and left uninhabited until modern times.

The excavation was organized and sponsored by the Leon Levy Foundation; the Semitic Museum at Harvard University; Boston College; Wheaton College; and Troy University, under license from the Israel Antiquities Authority and the Israel Nature and Parks Authority.