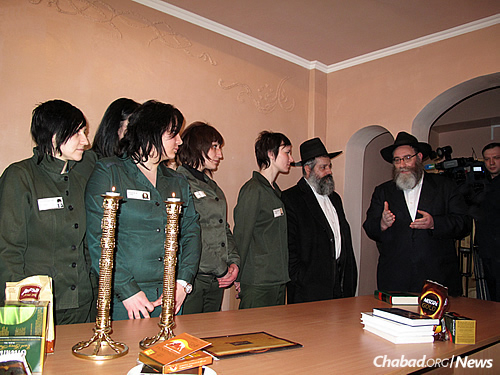 Maria has been a prisoner in Leningrad Region’s Kolonia No. 2 for the last eight years.

Born to a poor Jewish family in St. Petersburg, Russia, for a time she attended the city’s Jewish community programs. It was later that she got into serious trouble with the law, ending up at a women’s prison camp about an hour’s drive southeast of her native city. But some good news came on Monday, when Maria and 13 other Jewish women were on hand for the opening of the first-ever prayer room for Jewish female prisoners in the country.

“This is certainly the first of its kind in Russia,” says Rabbi Aharon Gurevitch, the Federation of Jewish Communities of Russia’s (FJC) head of Jewish chaplain services for the nation’s military and prison system. “I don’t know of anything like it for Jewish female prisoners anywhere in the world.”

Jewish prison chaplaincy in the area around St. Petersburg is headed by Chabad-Lubavitch Rabbi Ifrah Abramov, who visits the women’s camp about twice a month and before Jewish holidays. The women’s prayer room is the third in Leningrad Region (while Leningrad’s name changed back to St. Petersburg in 1991, the surrounding region’s name did not), and was a few years in the making. The other two serve male Jewish prisoners.

Abramov says a space for Jewish women to meet, pray and light Shabbos candles is especially important due to their rough surroundings. “Women in Russia usually don’t get actual prison time; the courts generally find other ways to punish them,” explains Abramov. “If they’re there, it means that it was something especially not good. So for these women, this room is a refuge.”

At Kolonia No. 2, the women sew and do other kinds of work. Although camp authorities allocated the space for the prayer room, the financial support for construction and the Jewish library came from Chabad of St. Petersburg, led by the city’s Chief Rabbi Mendel Pewzner, with additional literature supplied by the FJC. The inmates themselves did all of the construction on the room—sanding down the walls, painting them and creating decorative moldings. The focal point are candlesticks for lighting Shabbos candles, which were welded by male Jewish prisoners in a nearby camp as a gift for their female counterparts.

It is generally difficult to identify Jewish prisoners in Russia; Abramov’s work in reaching out to the women was made easier by Maria’s own outreach within the camp. She actively sought out other Jewish women, creating a circle that is by now a small community.

“In the beginning, I didn’t try to maintain my connection with the Jewish community because I was embarrassed and felt uncomfortable,” Maria, 30, told Russian television. “But this is a big support because here, like nowhere else, do you feel cut off from the world. You have time to think ‘How did this happen, how did we all end up here?’ and to consider your role in the world, your role as a woman and role as a mother.”

A camp official, along with Rabbis Gurevitch and Abramov, cut the ribbon at opening ceremony for the room. Rabbi Pewzner attached a mezuzah to the doorway.

According to Gurevitch, approximately 1,500 Jews can be found in Russia’s prison system. There has seen an enormous growth in availability of religious services for Jewish prisoners since 2010, when an agreement was signed between the FJC and Russia’s Federal Penitentiary Service. Today, 12 shuls exist in the Russian prison system, with each regularly visited by rabbis who give classes and provide Jewish materials for usage.

Pewzner says he’s been asked whether such a small number of prisoners really need their own prayer room.

“Each person is important; each one a world,” is the rabbi’s reply. “Each one has a right to be connected to their Jewish heritage and faith. That can have a positive effect on them, and after their release, on their family and surroundings as well.”

The prayer room opens in time for Pesach, when women will be able to gather in their new space to have a seder, eat matzah and drink grape juice.

“This is a small point where they can escape their surroundings and breathe,” says Abramov, who will deliver the Pesach supplies in the coming weeks. “It is a spiritual place where they can gain inner strength.”