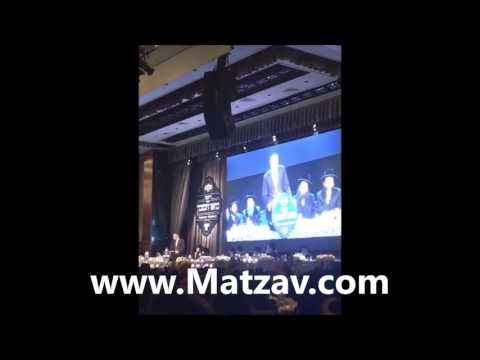 Tonight, at a dinner at the Hilton in Manhattan for Mosdos Bobov, New York City Mayor Bill de Blasio announced an important change in the sanitation collection schedule in Boro Park, Brooklyn, switching the morning pickup, which caused traffic gridlock on the busy neighborhood streets, to the late night hours.

Garbage that was previously picked up between 6 a.m. and 2 p.m. will now be picked up some time between midnight and about 8 a.m. Also, garbage picked up on Mondays and Thursdays will be switched to Wednesdays and Shabbos, another helpful change that will alleviate traffic and ensure a more effective pickup system that won’t wreak havoc on Boro Park’s already congested thoroughfares.

This important change will begin on Wednesday, April 6th, Matzav.com has learned.

With tens of thousands of children riding on dozens of buses each day in Boro Park at the same time that garbage is being picked up on the one-lane streets, the sanitation issue and its related traffic gridlock had become a very pressing one, with local leaders calling for imminent changes to the current system.

That change was finally made public this evening by Mayor de Blasio, whose remarks were greeted with loud applause by the guests at the Bobov dinner.

This important development is being hailed as a tremendous quality-of-life boost for local Boro Park residents.

Amazingly, because of the change, a mere seventeen sanitation trucks will suffice to cover areas that previously required over 80 such vehicles.