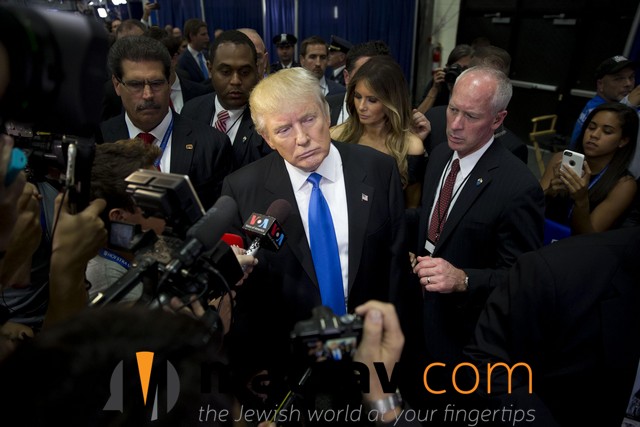 The snap analyses of Monday night’s debate came with a hard caveat. Donald Trump has broken the political media’s antenna, again and again. Gaffes that would have torpedoed other candidates and other campaigns did not slow him down. Similar gaffes, like Trump’s comment about “the Second Amendment people” stopping Hillary Clinton from swinging the Supreme Court and his later comment that the Secret Service should stop protecting her, got wildly different voter reactions.

That’s led to uncertainty about what would normally be a clear, clean storyline – that Trump lost the debate. The efforts of Trump’s online army to counter-spin this have been limited to trending the hashtag #TrumpWon, as TV networks and almost all analysts say otherwise. But in the hours after Trump and Clinton left Long Island, we’ve seen five narratives of how maybe, possibly, Trump got the better of things.

1. Hillary was too prepped. Moments after the debate ended, Trump’s top surrogates in the Hofstra University spin room began insisting that a “human” candidate had gone up against a sort of talking point cyborg. “The undecideds saw a human being in Donald Trump,” said Rep. Chris Collins, R-N.Y., one of the first members of Congress to back Trump. “If you’re saying something about me, and I don’t like it, then I’m going to interrupt you. I thought it was strange, a couple of times, that she didn’t interrupt him.”

The idea here is to exploit the authenticity gap, a source of endless frustration for Democrats who cannot understand how the host of “The Apprentice” is seen as more honest than Clinton. Trump has survived countless controversies with a retreat to that framework – he tells it like it is, and politicians don’t talk.

2. Trump won the first 15 minutes, so maybe people stopped watching after that. The asymmetry between Trump’s scrappy campaign and Clinton’s Death Star – as well as Trump’s decision to keep talking about his fat-shaming of a Miss Universe winner – is helping Clinton win the morning-after spin. But Trump’s campaign has been running a tight clip from the debate, one of the very first exchanges, as an ad. It’s easy to see why, as Trump boils down his best “outsider” argument and asks why Clinton has not achieved her goals after a life in politics. “He was better early,” wrote Stephen F. Hayes in the generally Trump-skeptical Weekly Standard. “Better to be better early.”

3. Trump won on the economy. True to form, Slate (where I worked from 2010 to 2014) published a contrary take on the debate in which Trump’s dominance of a key, early question steered Clinton into a near disaster. “Trump bullied his way through, at times barely letting her finish a stammering thought, but he also made one point that resonates with what so many distrustful working-class whites in the Midwest know to be true,” wrote Jordan Weissmann, the site’s economics columnist. “Clinton has been a politician for a long time. Where was she on trade before this presidential race?”

There is anecdotal evidence that voters noticed. While most quick-take focus groups found Clinton the winner of the debate, McClatchy – Trump’s new favorite news source, non-Sean Hannity division – found a collection of voters who found Clinton “pie in the sky” and Trump concrete. That’s risky for the Democrat. Her economic answer synthesized years of liberal think tank ideas, the rhetoric of Bernie Sanders, and the recent, successful records of Democratic presidents. It did not connect the way that Trump’s primary-winning rhetoric – “we’re getting killed on jobs” connected.

4. Trump lost on points but seemed credible enough. Breitbart News, which has loaned its CEO to the Trump campaign through the election, commissioned a “flash poll” of its own. The bad news for readers was that Clinton was seen as the winner of the debate. The good news: He managed to convince some waverers that he could indeed be president.

“This debate did not shift the race,” insisted pollster Pat Caddell. “What it did do was show Trump as plausible, as a strong leader and more importantly that he cares about people.”

This was the going theory, before the debate, of how Trump could win it. No analyst thought that the business mogul would outwit the former secretary of state. The theory was that he would become a plausible president, a face and voice it was possible to see in the Oval Office. The snap polls did not indicate this, but the hunt is on to prove that voters did.

5. Clinton missed the kill shot. The Democratic nominee’s decision to goad Trump then sit back as he tripped over his shoelaces seemed to deliver for her. But it did not deliver the sort of victory that ends a campaign, or starts a panic in the opposing camp, like Lloyd Bentsen’s humiliation of Dan Quayle in 1988 or Gerald Ford’s tangled explanation of whether Poland was under Soviet domination in 1976. To some observers, it could have, had Clinton sprung on Trump when he glibly said he paid no taxes because he was “smart.”

“Clinton was on a roll, clearly hoping to get through prepared material, and she let Trump off the hook with all the people who play by the rules,” wrote Jeb Lund in Rolling Stone. “Are they stupid? Are people who obey the law morons? Is everyone who thinks they should pitch in for roads and schools a chump? And how ethical are Trump’s smarts? Is he legally paying zero taxes, or is he putting himself on the same plane of financial genius as Al Capone?”

Clinton’s campaign latched onto the tax answer and clearly sees it as a weapon for the final stretch of the campaign. But it’s not dominating coverage of the debate like it could have; accordingly, Clinton’s frustrated attacks on Trump’s refusal to release his taxes have not broken through.