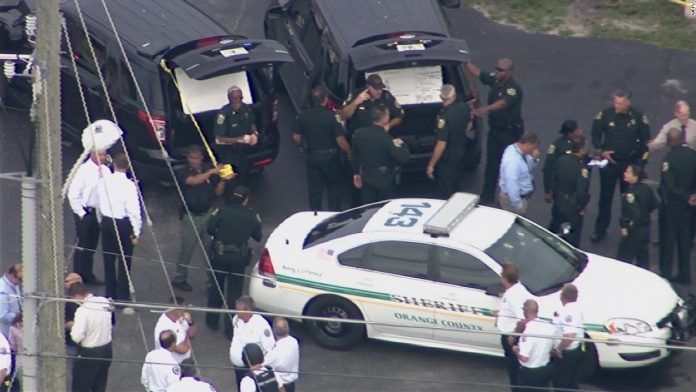 A gunman fatally shot five employees at an Orlando, Florida, business Monday and then killed himself, authorities said during a morning news conference.

Orange County Sheriff Jerry Demings said the shooter, identified by police as a 45-year-old former “disgruntled employee” who was terminated in April, opened fire on former co-workers at Fiamma Inc., which manufacturers accessories for recreational vehicles in an industrial area more than seven miles from downtown Orlando.

The shooter, who was carrying a gun and a knife, committed suicide, Demings said. The sheriff said that there were seven survivors in the attack.

“We have no indication that this subject is a participant in any type of terror organization,” Demings said during the news conference. “What this is at this point is likely a workplace violence incident.”

Demings said sheriff’s deputies received a 911 call about 8 a.m. about an active shooter situation and, when they arrived on the scene, they found four deceased victims – three men and a woman. A fifth victim was rushed to a nearby hospital, where he also died, the sheriff said. The sheriff said that the gunman had died “by his own means.”

Demings said that several years ago, the shooter, whose name has not been released, was accused of battering another employee at Fiamma. He has a criminal history that includes DUI and marijuana possession, the sheriff said.

After the early morning shooting, Shelley Adams told reporters her sister, who works at Fiamma was in the restroom when she heard a bang. When she came out, she saw someone on the floor.

Authorities said earlier on Twitter that the situation was “contained,” and deputies were “investigating tragic incident & will soon have accurate information.”
Orange County Sheriff’s Office spokeswoman Jane Watrel said in an email that deputies were on the scene and that there was “no threat to the community.”

The FBI dispatched members of the bureau’s Orlando office to the scene, where they are assisting in the investigation and working to determine the motivation, officials said.

Authorities did not immediately comment on a possible motive for the shooting, which occurred just a week before the anniversary of the Pulse nightclub massacre in downtown Orlando. That mass shooting killed 49 people and injured dozens of others. The attacker at Pulse, who was killed by police after an hours-long standoff inside the club, had pledged allegiance to the Islamic State.

“Because of the active nature of the investigation, we can’t comment on any motives at this time, but if a nexus to terrorism is discovered, we’ll update with that information as appropriate,” the FBI said in a statement Monday. “We’ll be working with Orange County to determine the reason for the shooting.”

Hospitals in the area did not immediately respond to requests for comment about whether they had taken in any of the victims from the shooting.

After the shooting, Florida Gov. Rick Scott asked residents across the state to pray for the families affected “by this senseless act of violence.”

“Over the past year, the Orlando community has been challenged like never before,” Scott said in a statement. “I have been briefed by our law enforcement officials on this tragic incident and Ann and I are praying for the families who lost loved ones today.”

Orange County Mayor Teresa Jacobs said, “Unfortunately, we’ve seen this scenario play itself out in our community and in other communities across the nation, and it is incumbent upon all of us not to become complacent or become callous to these horrific situations, but for each of our citizens to be vigilant . . . if they see something that seems abnormal, they need to say something.”