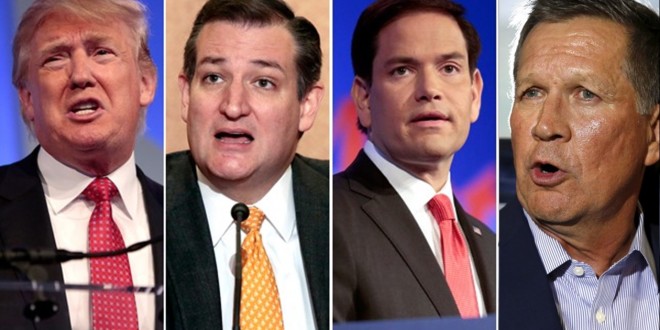 We don’t know all that much about who Donald Trump is going to pick – or even consider – as his vice presidential running mate. In fact, the most insight we have on Trump’s VP thinking is who he’s not going to pick. Trump tweeted – of course – this out Sunday afternoon: “The @washingtonpost report on potential VP candidates is wrong. Marco Rubio and most others mentioned are NOT under consideration.”

The story Trump is referring to is a terrific one by Ben Terris that explores the question of whether Ben Carson is the best or the worst candidate surrogate ever. (Carson, who Trump once compared to a child molester, has endorsed the real estate billionaire’s campaign and is helping to run the vice presidential picking operation.) Here’s the relevant passage from Terris’s piece:

“Ben Carson, the neurosurgeon turned presidential candidate turned unfiltered pitchman for Donald Trump and now part of the presumptive nominee’s vice presidential search committee, sat in the back of a Town Car with his wife, Candy, on his way to a televised interview. He had just explained to the reporter riding along that he wanted no role in a Trump administration when news arrived of a new poll naming him as the best-liked of a list of potential running mates.

” ‘Who else was on the list?’ he asked quietly, maintaining his usual inscrutable calm. The most favorably regarded contenders after himself, he was told, were John Kasich, Marco Rubio, Ted Cruz, Sarah Palin and Chris Christie.

Or not, according to Trump.

The one name we know – or at least Trump says – should not be on any VP shortlist is Marco Rubio, the Florida senator who was seen by many establishment types as their best hope to beat Trump for the nomination right up until the time when Trump crushed Rubio in his home state of Florida. Rubio has already said he wouldn’t take the vice presidential nomination if offered and seems to be a bit at sea in terms of his next step politically, so that all makes sense. (More on Rubio below.)

So who else wouldn’t take Trump up on his vice presidential offer? Well, lots of people. For the sake of this conversation, I will limit the universe of people to those who have been mentioned – either by Carson or in one of those speculative lists cooked up by the clickbait media. You can assume if you have heard someone’s name as a potential VP, and they don’t appear below on my “no way they would take it” list, they would probably take it.

_ Ted Cruz: The Texas senator is 45 years old and, by all accounts, finished as the runner-up in the 2016 presidential race. Although he played very nice with Trump at the start of the race, things ended pretty badly between the two. Unlike many people who would put those hard feelings aside for the chance to be considered in the veepstakes – cough Chris Christie cough – Cruz doesn’t really need to. Assuming – as I am sure he does – that Trump loses in November, Cruz starts the 2020 race as one of two top-tier candidates along with Speaker Paul Ryan. Why sacrifice that near-guaranteed perch for the long-shot chance of serving as Trump’s second in command for four to eight years?

_ Marco Rubio: Rubio, according to conversations I’ve had with people close to him, is sort of betwixt and between when it comes to his next move. Despite some urging to reconsider his plans to retire from the Senate, Rubio seems likely to stand firm and head out in November. What’s next is the harder nut to crack. Rubio has said he isn’t interested in running for governor in 2020 and would have a far-from-clear primary field since state Agricultural Commissioner Adam Putnam has been planning a gubernatorial bid for much of the past decade. Rubio could stay in the private sector and make money – he has four young children – but the danger there is by the time 2018 rolls around he is out of the daily, weekly or even monthly conversation happening within the GOP. Still, Rubio, like Cruz, is young enough not to need to take a risk like signing on with Trump.

_ Nikki Haley: I continue to believe that picking the South Carolina governor would be the smartest thing Trump could do. He won’t. “No, not Nikki Haley, no Nikki Haley no, she wasn’t under consideration,” Trump has insisted. And Haley would say no if he did ask. Young (she’s 44), Indian American and a prominent skeptic of Trump throughout this campaign, Haley would be just the sort of VP pick that might be able to change the narrative on Trump – and the Republican Party. But, term-limited out of her current job in 2018, Haley likely has an eye on her own presidential bid in 2020 and wouldn’t want to jeopardize what could be a promising campaign by attaching herself to Trump.

_ John Thune: The South Dakota senator looked very hard at running for president in 2012 and took a pass. That suggested to me – and others – that Thune had decided to take a different sort of path in his political career, one focused much more on rising up through the Senate than running for president. I’ve seen nothing over the last four years that convinces me otherwise. So why would Thune suddenly hop aboard the Trump train and throw his lot in with someone who, tonally, is literally his polar opposite. He wouldn’t.

_ Joe Scarborough: The “Morning Joe” host has been among the great mentioned because a) he’s a former member of Congress from Florida and b) he saw Trump’s high political ceiling long before most people. But, of late Scarborough and The Donald have clashed – Scarborough has said he can’t support Trump until the billionaire walks back his plan for a temporary ban on Muslims entering the country. And, Scarborough has a pretty great gig at the moment.