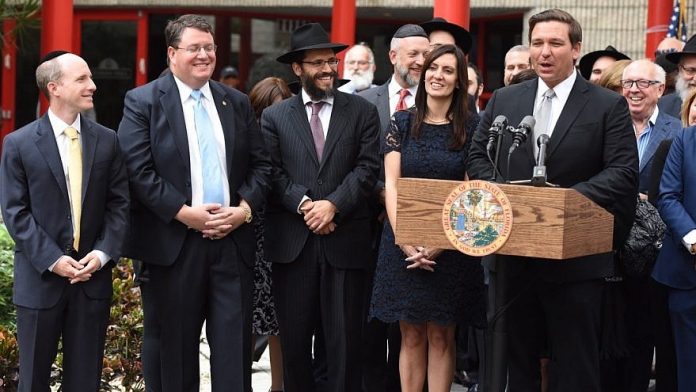 Florida Gov. Ron DeSantis announced on Tuesday that his first international trip in office will be to Israel in May.

“I promised to be the most pro-Israel governor in America, and that the first delegation I would lead would be to the State of Israel,” said the Republican governor. “I’m pleased to report that I’m keeping that promise. Our delegation will bring business, academic and political leaders to help strengthen the bond between Florida and Israel.”

The six-day trip will seek to further economic and other cooperation between the Sunshine State and the Jewish state, where the governor and his cabinet plan to be at the U.S. embassy in Jerusalem.

DeSantis also announced that he will be the keynote speaker at the 2019 Israel-American business summit, hosted by the federation of Israeli chambers of commerce and the U.S. embassy in Israel.

In the initial days of his administration, DeSantis gave his support to improve security at Jewish day schools and slammed both the BDS movement and Airbnb’s policy against Jewish listings in Judea and Samaria, which the company reversed on Tuesday.

“I am encouraged to hear that @Airbnb will not move forward with its policy that would eliminate the listings of Israeli properties. Florida will never support companies that discriminate against Israel,” tweeted DeSantis.