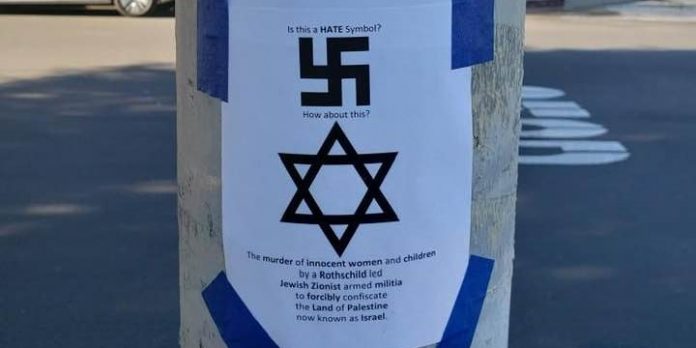 Several flyers containing antisemitic messages were found near at least two schools and a shopping mall in Los Angeles on Monday.

“What is the difference between Crackheads and Jews?” one flyer read.

Another appeared to suggest that the Star of David was a “HATE Symbol” akin to a Nazi swastika, followed by the text, “The murder of innocent women and children by a Rothschild led Jewish Zionist armed militia to forcibly confiscate the Land of Palestine now known as Israel.”

Four such flyers were placed near El Camino Real Charter High School in Woodland Hills, while one was spotted on the perimeter of Nestle Avenue Charter Elementary School in Tarzana.

Officials in both schools told The Algemeiner that police were contacted and the flyers removed.

“They are targeting neighborhoods with a large Jewish population,” said Julia Levin, who has two children attending El Camino.

Levin said her husband took down one of the flyers after encountering them on Monday. “This is the first time I’ve seen anything like this [in the area],” she told The Algemeiner.

“The language includes reference to Rothschilds which would seem to indicate someone who has been absorbing new/old anti-Semitic tropes on social media,” Cooper said.

A representative for the Los Angeles Police Department did not respond to request for comment by press time.