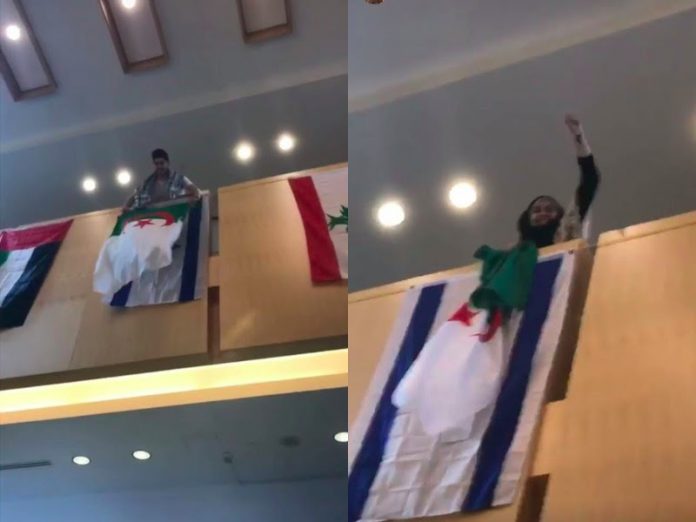 After a message comparing Jews to rodents was posted on Facebook in honor of an anti-Israel event at an Ontario university, administrators vowed this week to investigate and take action against the perpetrators.

“We don’t know yet if any of our students were involved, but we are looking at the incident and will follow our code of conduct if we find that they were,” said University of Ontario Institute of Technology (UOIT) vice president of external relations Susan McGovern about the school’s chapter of Students for Justice in Palestine celebrating online, following the covering up of an Israeli flag with its Algerian counterpart at an on-campus multicultural language festival on Thursday.

Other social media posts — which have all since been deleted — included telling a Jewish student to “go back to Palestine,” according to the Jewish human rights group B’nai Brith Canada.

“We work very, very hard to create students who will be good citizens, who we can proudly launch into society,” McGovern said. “We certainly do not condone such behavior and will not drop the ball on this matter.”

Michael Mostyn, CEO of B’nai Brith Canada, told The Algemeiner that he has worked closely with the UOIT administration regarding this incident and others, and commended the school for its strong, proactive approach.

“Unfortunately, we have seen stuff like this on campuses all across North America on a a regular basis,” he said. “How a school deals with an incident to shape its future is what really matters, and, as of now, UOIT has been very responsive.”

Following last week’s incident, UOIT’s president issued a statement reviewing the university’s values, so as to “remind ourselves of who we are.”

Last year, the administration publicly said that it does not support the anti-Israel BDS movement, after the UOIT student association banned the campus’s only pro-Israel group, Hasbara Fellowships, from participating in Social Justice Week. (The incident is currently under review by the Ontario Human Rights Tribunal).

The incident at UOIT was the latest in a string of what have been called antisemitic activities on Canadian campuses, including a staged walkout of a vote on Holocaust education at Toronto’s Ryerson University and the support for a former student rep who tweeted “punch a Zionist” at McGill.