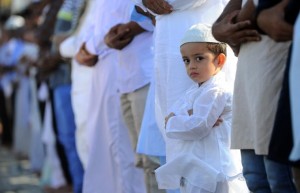 The district, which serves about 1.1 million students, became the largest school system in the United States to shut down for the observance.

Local Muslims welcomed the move as a symbol of the community’s acceptance and shift toward inclusion. They said they hoped it would become an example others would follow. “As an imam as well as a parent I am very happy,” Jamaica Muslim Center director Imam Shamsi Ali told AFP. “I’m sure this kind of policy from the government side will push Muslims further to feel a sense of belonging.”

New York City has an estimated 600,000 to 1 million Muslim residents, and between 10 and 12 percent of its public school students identify as Muslim. That means that holy days tended to devastate attendance — for example, the last time Eid al-Adha was on a school day, more than one-third of PS/IS 30 in Brooklyn was absent, according to a news release.

About two years after first agreeing to give students the day off, Mayor Bill de Blasio announced the calendar change in March. He officially canceled classes on Eid al-Fitr, which occurred in July and marked the end of the fasting month Ramadan, and Eid al-Adha. Eid al-Adha, also called the Feast of Sacrifice, runs from Wednesday night to Thursday night. Schools in New York City were already closed Wednesday for Yom Kippur.