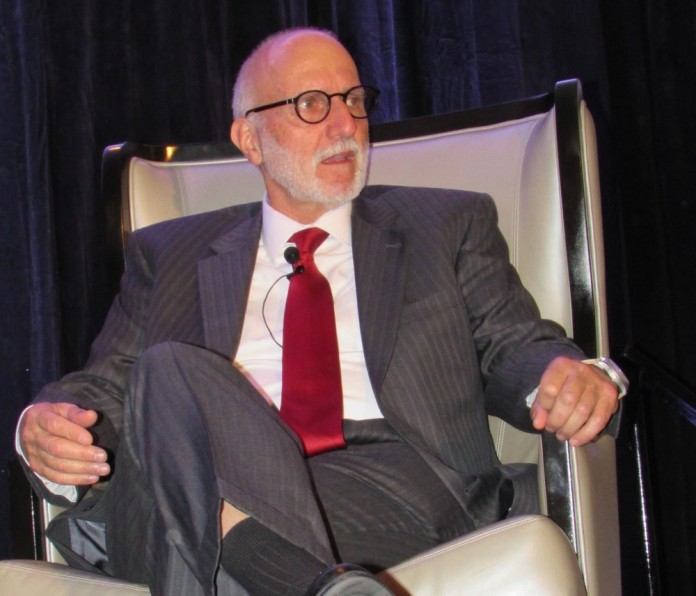 Alan Gross used to be nothing more to me than a tragic headline.

When I started my position at this news service in July 2011, Gross had been imprisoned in Cuba since December 2009 for what that country called “crimes against the state.” Gross, a subcontractor for the United States Agency for International Development, went to Cuba to help the Jewish community there access the Internet. After his arrest, he received a trial he describes as a “B movie,” before correcting himself to “C movie.” Cuba would later refuse to let Gross visit his mother before her death from cancer, something he says he’ll “never forgive” that government for—and Gross, as the interview that follows will reveal, is a very forgiving person.

Then came Dec. 17, 2014. Gross, whose health was severely deteriorating, was released from prison against the backdrop of rapprochement between the U.S. and Cuba. Suddenly, Alan Gross became a different kind of headline, a story of freedom and redemption.

But it wasn’t until April 12, 2016, when I sat down with Gross at Houston’s Galleria mall, that there was a real person behind those headlines. What stood out the most for me that day were not his insider’s perspective on Cuba and his deep reflections on life in prison, but rather his real personal qualities. Five years of arbitrary detention—indeed, a United Nations agency officially deemed his imprisonment as arbitrary—did not harden his heart. It seems that there isn’t a bitter bone in his body. While Cuba controlled his physical whereabouts for five years, he explains, the regime couldn’t and still can’t control his emotional reaction to the situation.

“What anger does over an extended period of time, it becomes an anchor, and it drags everybody down,” Gross, 66, tells me. “If you can’t let go of the anchor, even just a little bit, you’re not going to move forward. I’d much rather focus on the next five years than on the last five years.”

What prison also didn’t do to Gross, whose career in humanitarian aid work has spanned 35 years and 54 countries, was weaken his ambition to change the world.

“There might be snow on the roof, but there’s still fire in the furnace,” he says.

But given what Gross endured in Cuba, could he ever step foot in the country again, perhaps to finish the humanitarian job he started? He says he’d go back to Cuba “in a heartbeat.”

“Like anybody who travels to Cuba, you need a visa. If I have a visa, that’s permission. But I’m not going to apply for a visa until I have a conversation with the Embassy of Cuba in Washington. I’ve sent them two emails, to which they have not yet responded, which is par for the course,” he says.

Cuba’s government aside, the people of Cuba hold a special place in Gross’s heart. He recounts one of his first speaking engagements after the release, when a Cuban-American audience member questioned Gross’s same declaration of being willing to return to Cuba “in a heartbeat.” In his exchange with Gross, the audience member explained that he, too, returned to Cuba despite his feelings about the government—because he has family members still living there.

“I have family there now, too,” says Gross, referring to his former cellmates in prison.

When Gross’s freedom was secured, he implored his lawyer that he wouldn’t leave Cuba until one particular cellmate was also free. Gross says his lawyer told him that he could do more for his cellmate from the U.S. than he could do in Cuba, and when Gross insisted he needed more than that assurance, the lawyer took on his cellmate’s case pro bono.

“This is family. My blood is in that country,” says Gross.

‘People often ask me, ‘It’s really interesting, Alan, you don’t seem to have any bitterness towards the Cuban people,’” he says. “Absolutely not, quite the contrary. I have only the kindest and the warmest feelings towards the most generous, warm, friendly, creative, and caring people that I’ve come into contact with there. I can’t really say the same thing about the government of Cuba.”

Gross was visiting Houston to speak at the Jewish Federation of Greater Houston’s Maimonides Society dinner, which is held for the federation’s group of physician donors.

That care is what Gross likens to an “investment.”

“I took me a while, but I finally realized that people were invested in me, either collegially or in a friendship capacity, or in a family capacity, or in a human capacity,” he says. “Somehow people could relate to my plight and they were invested in me. And when I got off the plane at Andrews Air Force Base, I was a return on that investment. I mean, that’s cool. How many people get to see the return?”

When I ask Gross to divide the pie of credit for his release, he first mentions “my wife, she was my rock, my champion. She never gave up….And then right up there with her, Scott Gilbert, the last lawyer [who worked on my case].” He proceeds to note the advocacy of Congressional lawmakers before moving on to the Jewish world, including the Jewish Community Relations Council of Greater Washington, which was behind a weekly vigil that ran for four years across from the Cuban Interests Section (now the Cuban Embassy) in Washington, DC.

“Ultimately, the final decision to get me out of [Cuba] could ultimately be made in one office, and that was the Oval Office. And so, yea, [President Barack] Obama, I’m indebted to him. He finally came through,” says Gross.

Essentially, says Gross, it was “everyone” who brought about his release—with a particular nod to American Jews.

“Everyone tipped the scales,” he says. “But where was the greatest push in volume among everyone? It was identified in our Jewish community in this country. It was incredible, the response. I became the poster boy. I mean, this is what our community is supposed to do.”

Gross says three things helped him get through prison: exercise, humor, and his family’s Holocaust history.

His father’s family came from a small village outside of Munkatsh, Hungary, and when the rest of the family was killed by the Nazis, there was one segment—six brothers and one sister from the same household—that completely survived.

“I knew that my ordeal was nowhere near as bad as their ordeal, so I had to ask myself, ‘How did they survive?’ And I figured that there was something genetic involved, and I have the same genes, so I knew I came from strong stock,” says Gross.

Asked if not only Jewish heritage, but Jewish faith played a role in his survival, Gross notes that his wife sent him two pictures of the couple’s closest friends in Maryland, with whom they routinely spent Shabbat. Gross would take out the photos on each Friday night in prison to relive the Shabbat experience. He also began receiving cans of salmon from Costco and saved them specifically for Friday night dinner.

“One day one of my cellmates came up to me and said, ‘Don’t get me wrong, I really love the salmon, but how come we’re only eating this on Friday night?’ I said, ‘Well, we eat something to mark the end of one week and the beginning of another. We need a timeout….In my community we call this Shabbat,’” recalls Gross.

‘Food for the brain’

While sipping a cup of Starbucks coffee, Gross points out, “Cuba used to export coffee to the U.S., and now they import coffee. Before the [communist] revolution [in Cuba], the U.S. imported more beef from Cuba than any other country in the world. But I didn’t have any meat for five years in prison. There’s no meat in Cuba.”

But Gross’s biggest gripe with Cuba is how the government deprived its citizens not of coffee or meat, but of what he calls “food for the brain.” Before his arrest in 2009, the Internet was illegal in Cuba and could only be accessed by what Gross estimates to be “2 percent of the population.” Internet service would cost $6 an hour at hotels serving tourists, and non-tourists caught using the Web would be arrested, says Gross. In June 2013, the Internet was legalized in Cuba, and prices went down first to $4.50 and now to $2 an hour. Initially, Cuba only enabled Internet access on government-provided computers rather than personal devices, but eventually WiFi was allowed.

“My philosophy is, information is food for the brain,” Gross says. “It’s to be a human right to obtain information, to access information. Without it, your development is thwarted. And so what do we have in Cuba now? We have a terrible situation, where there is incredible talent, and they’re not allowed to use it to the fullest.”

Is it difficult for Gross to stomach America’s normalization of relations with the regime that imprisoned him for five years?

“Not at all,” he says. “I was an involuntary catalyst to a correction in U.S.-Cuba policy. For 55 years, we had a mutually belligerent bilateral policy environment. Both countries did bad things to the other. We might’ve done more bad things to them than they did to us…We have a very long history of doing stupid things in Latin America, and in other countries too, like Iran.”

Yet for five years in Cuba, diplomacy—or a lack thereof—failed Gross. Even the particulars of his release were the source of confusion. The U.S. and Cuba executed a prisoner exchange that day, but the Obama administration insisted that Gross was freed separately on humanitarian grounds. By the book, America traded three members of the “Cuban Five” spy ring for Rolando Sarraff Trujillo, a Cuban intelligence officer convicted of spying on Cuba for America’s Central Intelligence Agency. But don’t believe the book, says Gross.

“The bottom line is that our government has a problem in valuing U.S. citizenship….They couldn’t get their hands around the concept of apples and oranges. [Trujillo] was the official part of the trade, and I was the humanitarian release. Believe that and you won’t get beyond Disneyland. It was a trade,” he says.

But at the end of the day, Gross insists on looking forward rather than back at his ordeal. So what do his next five years look like?