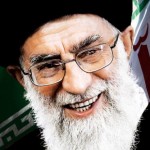 Iran’s supreme leader, Ayatollah Ali Khamenei, has often said that he believes ISIS was created by the U.S. as a way to regain a foothold in Iraq and to fight President Assad of Syria, an ally of Iran.

“We have evidence, we know,” he told an audience of clerics last week. Khamenei reminded them that al-Qaeda – a creation of the CIA, Iran has said – and the Taliban were, in the eyes of Iranian intelligence, devised by the West as a counterweight to Iran. “There is no doubt that these movements are created by Western powers and their regional agents.”

From the Iranian viewpoint, analysts say, creating a terrorist organization opposed to Iranian interests is the obvious thing for a superpower to do.