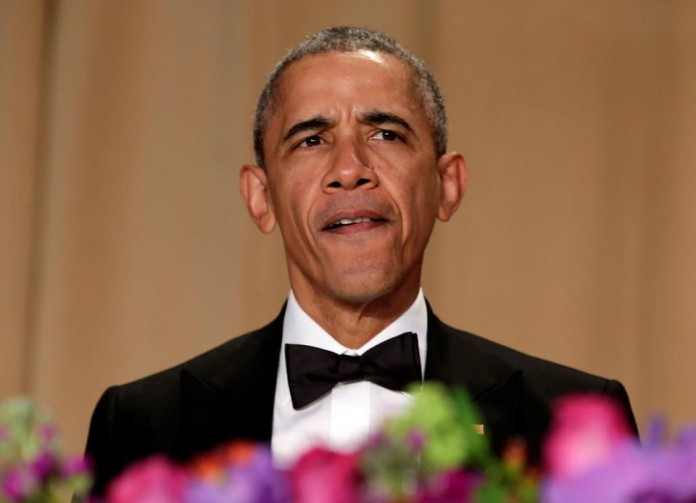 In his final performance as stand-up comedy’s commander in chief, President Obama shticked the landing at last night’s annual White House correspondents’ dinner, cracking wise about the election, his waning days as president and, of course, Donald Trump.

“The Republican establishment is incredulous [Trump] is the nominee,” joked the president during his monologue before 2,600 dinner-goers at the Washington Hilton. “Incredulous. They say he lacks foreign policy experience. But he’s been meeting foreign leaders: Miss Sweden, Miss Argentina, Miss Azerbaijan.”

Trump would succeed in closing the federal prison in Guantanamo, Cuba, the president said, “because he knows a thing or two about running waterfront properties into the ground.”

Noting that former New York mayor Michael Bloomberg was at the dinner, Obama compared him to Trump, another New York billionaire. Bloomberg “knows policy in depth and he’s actually worth the amount of money he says he is,” said Obama, drawing ooohs from the crowd.

Turning on himself, Obama said: “I do apologize that I was a little late tonight. I was running on CPT [colored people’s time] – which stands for jokes that white people should not make.

“This is my eighth and final appearance and I am excited. If this material works well, I’m going to use it at Goldman Sachs next year [and] earn me some serious Tubmans.”

He added, “Next year someone else will be standing in this spot. And its anyone’s guess who she will be.”

He noted that on his recent trip to Great Britain, he had lunch with the queen, saw a Shakespeare performance and played golf with Prime Minister David Cameron. “Just in case anyone was wondering if I’m black enough, I think that settles the debate.”

Commenting on his family’s desire to finally leave the White House after two terms, Obama quipped: “Someone jumped the White House fence last week. But I have to give the Secret Service credit. They found Michelle and brought her back.

“And yet,” he added, “somehow despite all the churn, my approval ratings keep going up. The last time I was this high I was trying to decide on my major.”

Turning to the contest among those vying to replace him, the president introduced Bernie Sanders.

He cracked that Sanders’s campaign slogan – “Feel the Bern” – was superior to Hillary Clinton’s: “Trudge up the Hill.”

As for Trump’s Republican challengers, Obama noted: “Ted [Cruz] had a tough week. He went to Indiana . . . and called a basketball hoop a basketball ring. What else is in his lexicon? ‘Baseball sticks? Football hats? But sure, I’m the foreign one.”

During his two terms in office, Obama has been among the more adept at delivering his comedy monologue, an annual ritual since John F. Kennedy began the tradition at the dinner in 1962.

Sanders eschewed the standard tuxedo in favor of a suit and tie. He and his wife, Jane, were guests of CBS.

Trump declined to attend this year’s event, despite numerous invitations from media organizations. His eldest sons, Eric and Donald Jr., attended in his place.

The sponsoring White House Correspondents’ Association saluted Washington Post reporter Jason Rezaian, who was jailed by Iranian authorities for 18 months until his release in January. Rezaian, who attended the dinner with his wife, Yeganeh Salehi, and brother Ali, received a standing ovation when he presented a series of journalism awards. “This is a big and intimidating room,” he told the crowd, “but it beats solitary confinement.”

The event was carried live by C-SPAN, CNN, MSNBC and Fox News.

The first dinner was held in 1921, when a group of reporters who had covered Warren G. Harding’s presidential campaign got together to fete the newly elected president.

He didn’t show up.