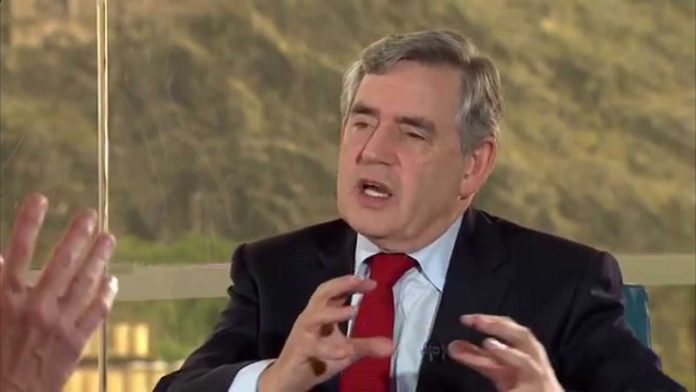 Former British prime minister Gordon Brown slammed his own Labour party on Sunday evening for its failure to combat antisemitism.

At an event, held at north London’s Hampstead Synagogue, Brown demanded the immediate expulsion of any member found to be trafficking in antisemitism.

“To fail to act against the abuses we have witnessed runs counter to the very principles of the Labour Party we joined,” Brown said.

“To the Jewish community, we promised ‘never again.’ We promised that the crimes of hatred, discrimination, and persecution would never recur,” he continued. “But at a time when attacks on Jewish schools have risen 100 percent, attacks on or near Jewish synagogues 400 percent, and attacks are carried out on social media thousands of times over, we have not lived up to that promise.”

Brown said that Labour owes the Jewish community “an unqualified apology,” which would be “a starting point in rebuilding trust.”

“We cannot go on ignoring the consequences of the upsurge in hate and hate speech, all too often in the form of sinister, anonymous, and untraceable internet trolling,” he stressed.

“Opposing antisemitism and every manifestation of racism goes to the heart of who we are and what we stand for as Labour,” he stated. “It’s about the moral soul of a party, whose most basic goal is a commitment to equality for all — not just for some who suffer oppression — but everyone.”

In response to the report, the head of the Anti-Defamation League, Jonathan Greenblatt, tweeted, “Encouraging to hear @OfficeGSBrown state firmly what current @UKLabour leadership seems to have forgotten: there should be no place in politics for those who engage in or make excuses for #antiSemitism & hate.”

Since far-left MP Jeremy Corbyn, known for his hostility to Israel, seized control of the party leadership in 2015, Labour has been wracked by antisemitism scandals, several touching Corbyn himself. Polls show the overwhelming majority of British Jews consider him personally antisemitic.