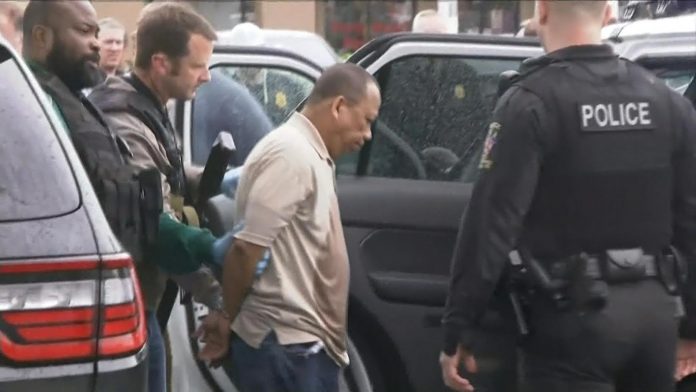 As he unsuccessfully tried to carjack a woman at a busy mall and good Samaritans came running toward her screams, the gunman shot and wounded her – and smiled.

Still trying to snatch an SUV less than an hour later, after he had killed one of those helpers and wounded the other, he turned his gun on another woman and killed her – then grabbed some chicken and doughnuts for lunch.

Eulalio Tordil was described as a calculated, coldblooded and cowardly “serial killer” at a court hearing Friday before he received four back-to-back life sentences in a murderous Maryland shooting spree in 2016 that started with the slaying of his wife in a high school parking lot and ended a day later with the deaths of two strangers as he fled police.

“There was absolutely no reason for him to do what he did other than cowardice and selfishness,” Montgomery County Circuit Court Judge Sharon Burrell said before sentencing Tordil in the deaths of the strangers. “Life got too tough for him so he decided to solve his problems by killing people.”

Tordil, 64, will be imprisoned without the chance of parole.

Tordil pleaded guilty in April to two counts of first-degree murder in the shootings of Malcom “Mike” Winffel, 45, and Claudina Molina, 65.

Winffel was shot as he went to the aid of the woman whom Tordil tried to carjack in the parking lot of a Montgomery County mall.

Unable to steal a vehicle at the mall, Tordil later fatally shot Molina as he tried to steal her SUV outside a grocery store where the mother had gone to buy milk.

Tordil’s public defender Theresa Chernosky asked the judge to consider Tordil’s life beyond the two-day shooting spree. Chernosky said that Tordil was a Catholic school choir boy, former member of the military and a devoted father who postponed retirement to help pay for his stepdaughters’ college costs.

He was so proud of his daughters, Chernosky said, that he put a photo of himself and his family at a martial-arts tournament into the backpack he stocked and carried as he fled police.

“A person is not as bad as his worst deed,” Chernosky said, quoting a line from the movie “Dead Man Walking.” “Two horrible days do not define him.”

Tordil’s tear of violence that panicked the region and put businesses and schools in suburban Maryland on lockdown began on May 5, 2016, when he shot his wife, Gladys Tordil, 44, outside of High Point High School in Beltsville. Gladys Tordil was picking up her daughters when her estranged husband confronted her in the parking lot at the Prince George’s County school.

After shooting his wife in front of one of his stepdaughters and shooting at a bystander who tried to intervene, Tordil, a former Federal Protective Service police officer, fled.

He wound up the next day in neighboring Montgomery County, where he killed Winffel and Molina as he tried to dodge police.

Two months before the shooting, Tordil turned in a stash of guns to law enforcement under the requirement of a protective order his wife won against him, yet he kept the one weapon he would eventually use to kill three and wound three others.

A journal of Tordil’s writings addressed to his wife showed he felt that the fallout of their relationship had “reached a point of no return” and asked “God and the potential victims . . . for forgiveness,” McCarthy said, reciting the passages.

And Tordil said he planned to die “in a hail of bullets” via “suicide by cop,” McCarthy said.

“It’s not just two days,” McCarthy said. “This is something that brews and simmers for weeks.”

Winffel, Molina and others were lauded as heroes who fought back against Tordil. Winffel had heard a woman screaming in the mall lot and ran to help.

In his attack on Molina shortly after, she clawed at Tordil and ripped off his eyeglasses as he tried to carjack her. She was later found dead, still clutching his glasses, a last act that police later said prevented Tordil from driving far after the shootings.

“My mother fought because she was brave,” Claudina Molina’s daughter Melissa Molina said, directed at Tordil, at Friday’s sentencing hearing. “Not like you.”

She said that her mother was an immigrant and a single mother who worked two jobs to provide for her children and also struggled financially.

And she pushed back against the portrayal of Tordil as burdened by problems.

“We all have problems, but we don’t go around and kill just randomly,” she said.

Tordil pleaded guilty last month in Prince George’s County Circuit Court in his wife’s slaying and the wounding of the bystander. He is set to be sentenced in that case Sept. 6.

During the two-hour hearing, he stared straight ahead, never turning to look at video slide shows featuring photos of the victims he killed or glancing at family members of the dead as the relatives spoke.

When asked if he wanted to speak, Tordil declined, although another of his attorneys, David Booth, said his client wanted to “express his complete sorrow.”

His defense team said that Tordil spiraled into depression and destruction after his family suffered financial problems and his wife issued a protective order that eventually led to his suspension from work.

“He finds himself trapped in his own mind,” Chernosky said.

Family members shared photo slide shows of Winffel and Molina set to soft music at the hearing. As the images of their relatives flashed by – blowing out birthday candles, cutting a wedding cake or smiling in front of Christmas trees – sniffles and tears sounded in the courtroom.

Throughout the hearing, prosecutors and the family of those slain drew several comparisons between Tordil and their loved ones. Those wounded or killed by Tordil went down fighting, preventing others from harm, they said. And though they all faced family problems or financial issues, none of the victims thought about injuring others the way Tordil did.

Tordil was a coward, they said. But Winffel, Molina and the others were heroes.

“We’re not the victims, we are the victors,” Norma Winffel said. “Today, we take our own lives back.”