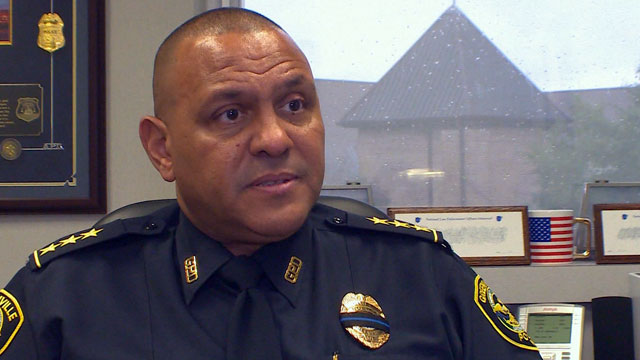 A retired police chief says he was detained at John F. Kennedy International Airport and held for 90 minutes earlier this month because of his name.

Hassan Aden, 52, of Alexandria, Virginia spent 26 years with the Alexandria Police Department before leaving in 2012 to become chief of police in Greenville, North Carolina. He retired from the 250-person force in 2015.

Aden says he was returning from Paris on March 13, where he had been celebrating his mother’s 80th birthday.

When he arrived at customs at JFK, he expected to be handed back his passport and told “welcome home” like everyone else. Instead, a U.S. Customs and Border Protection officer asked him: “Are you traveling alone?” Aden replied he was and the officer said, “Let’s take a walk,” in Aden’s recollection.

“I was like ‘oh boy, here we go’ ” said Aden, an Italian-born naturalized American citizen who has lived in the United States for 42 years.

He said he was escorted to a makeshift office, prohibited from using his cellphone and given little information about the reason for the holdup. At one point, Aden said he asked an officer how much time could pass for a detention to be considered reasonable. The officer replied that Aden wasn’t being detained.

But inside the room, where there were three desks staffed by CBP employees and two dozen chairs, signs read “Remain seated at all times” and “Use of telephones strictly prohibited.”

“Two signs that this was not voluntary; this was indeed a detention,” Aden said.

Aden said he told an officer he was a retired police chief and a career law enforcement officer, but the man said he had “no control” over the situation and it “didn’t matter” what his job was. Another officer explained that someone on a “watch list” had been using Aden’s name as an alias, and his information was being cross-checked with another agency, Aden said.

A spokeswoman for U.S. Customs and Border Protection said in an email Sunday that she could not comment on Aden’s specific case due to the federal Privacy Act, “but all travelers arriving to the U.S. are subject to CBP inspection.”

“At times, travelers may be inconvenienced as we work through the arrival process to ensure those entering the country are doing so legitimately and lawfully,” she said.

She pointed to the agency’s nondiscrimination policy that bars race or ethnicity from being considered in screening “in all but the most exceptional circumstances.”

Aden is the son of an Italian mother and Somali father. He lamented what he describes as the country’s shift toward “cold, unwelcoming” policies such as President Donald Trump’s travel ban.

“It just feels like ever since the talk of the travel ban it’s like now there’s actually – there’s some tangible experience . . . of that talk,” he said.

The travel ban, which seeks to block entry to the U.S. by people from six Muslim-majority countries, is on hold after two judges issued rulings blocking it.

While he is not Muslim, Aden said such policies – and the attached rhetoric – could lead to attitudes that would make authorities suspicious of his name.

Aden, who heads a consulting firm specializing in police and criminal justice reform, said he understands Customs and Border Protection’s duty, but said he was treated unfairly – especially because the detention stretched for more than an hour.

“I fully support the mission of the Customs and Border Protection agency,” he said. “And I fully appreciate the difficulty of their job and the dangers of their job. What I question here is essentially their policies and what they view as a reasonable detention. And I would venture to say that 90 minutes is an unreasonable detention when there is no probable cause to believe that a crime has occurred.”

Said the CBP spokeswoman: “We strive to process arriving travelers as efficiently and securely as possible while ensuring compliance with laws and regulations governing the international arrival process.”

Chuck Wexler, executive director of the Police Executive Research Forum, a Washington, D.C.-based independent police think tank that focuses on public policy issues, said Aden – who is a member of the organization – was treated unfairly.

“I know Hassan. When he was a police chief and also when he was deputy chief in Alexandria. … What I read was, he wasn’t questioning them stopping him and asking him questions. What he questioned was why it took an hour and a half to resolve the situation,” Wexler said.

Aden said he is a frequent traveler and when his wife worried that something like this might happen in advance of his trip, he shrugged it off, thinking “no way.”

“This experience makes me question if this is indeed home,” Aden said on Facebook. “My freedoms were restricted, and I cannot be sure it won’t happen again, and that it won’t happen to my family, my children, the next time we travel abroad. This country now feels … in the beginning stages of a country that is isolating itself from the rest of the world – and its own people – in an unprecedented fashion.”

The incident robbed him of that sense of comfort, he said.

“I feel . . . vulnerable and I feel as though citizens and foreign nationals have zero control about what happens and there’s no accountability for what happens in there,” he said.

Finally after about an hour, a friendlier officer took over and took an interest in Aden’s case, he said. He said she prodded the other agency for updates and eventually cleared him for entry.

Aden, who uses TSA PreCheck, sailed through security and made his afternoon flight to D.C., he said.

As the ordeal unfolded, Aden said, “I wondered about others. What happens to people when they don’t know any better?”

“I’m sure it’s terrorizing a lot of people and not making us any safer.”

Wexler, too, raised concerns about the treatment of everyday citizens.

“It really doesn’t matter whether Hassan was a police officer or former deputy chief,” Wexler. “What matters is that he should have been treated with respect.”